The Free-Reed Family: A Brief Description
Part One: A Definition of the Free-Reed
What exactly is a free-reed instrument?

There are many reed instruments, such as the single-reed instruments (clarinet and saxophone) and double-reed instruments (oboe, English horn, bassoon and contrabassoon) which have reeds made from a thin strip of cane. There are also reed pipes in the organ which have reeds made from metal. The tones of both types of instruments are produced by a current of air -- either from the player's lungs or from a wind chest -- which strikes the reed and causes it to vibrate. Yet none of these reeds are free-reeds; they are beating-reeds, that is, the reeds strike against another object to produce the sound.

On the other hand, the free-reeds do not strike against anything while vibrating. Toni Charuhas, the author of The Accordion, wrote, "The historian Geiringer specifies that there are five different kinds of reed instruments, one of which is the kind having a single (hard) freely vibrating reed. This type of reed is known as the free reed. It is called 'free' because it has an elastic tongue which vibrates freely within a frame."

(a reed plate assembly with the reed plate or frame, valve and valve stiffener, reed tongue and rivets.)

Inside of an accordion (left-hand manual)
showing reed blocks (made from wood), metal reed plates, tongues and leather valves
(from the catalog of Victoria) 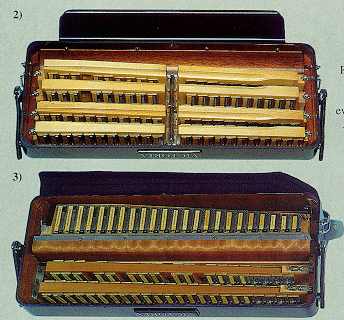