The principle of the free reed appears to have had its inception in Asia and after spreading there was subsequently introduced into with West where it developed into such instruments as the harmonica, the accordion, the harmonium and the free reed organ. Instruments of this type are based on the principle of a free vibrating reed, unlike the single beating reed of the clarinet or saxophone, and likewise unlike the double reed instruments like the Western oboe, or the Indian shahnai and Chinese sona. The Chinese written character for the mouth harp, jaw's harp or guimbarde is the same character for tongue and the character used to describe the actual reed used in the Chinese mouth organ, sheng, known in Japan as sho.

Free reed instruments of various types abound in traditional Asia. Mouth harps are very wide spread. The various type of kobing or kubing of the Philippines serve as good examples. The klui of Thailand is an interesting and unique example of a free reed functioning as the sound generator for a flute. Much more common are the various types and sizes of mouth organs found in South East Asia. The Laotian and Northern Thai, khene and the now extinct Burmese hnyin are examples as well as the many types found among the Hill Peoples of Burma, Thailand and Vietnam.

The mouth organ, or sheng, became a mainstay in the music of the courts of ancient China and from here was introduced into Korea as the saeng-whaeng and into Japan as the sho Chinese outdoor wind ensembles also used the sheng together with the conical double reed, the sona or the cylindrical double reed, the kuan, or pi, for lively festive music.

A European travellers in the 18th Century appear to have brought a mouth organ to the West and thereby gave rise to the development of European instruments following this principle.

The Philippine kobing from Northern Luzon

Two kobing from the Maranao people on the island of Mindanao in the Southern Philippines.

Ensemble of the Yin people of hill country of Myanmar or Burma, using panpies and mouth organs.
Sound File

The sho being played in the kangen ensemble of the Japanese court orchestra, Gagaku. 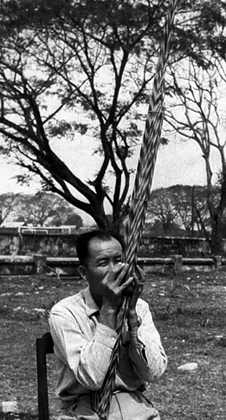