Highlights in the Career of this Eminently Successful Accordion Artist. -- Some of his Ideas Regarding Playing, Composing, and Music in General. 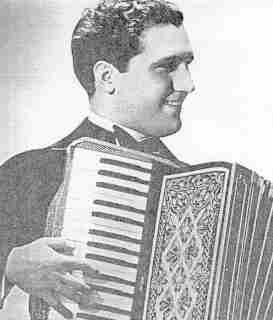 This article was reprinted in its entirety from the November 1936 issue of Accordion World (New York).

When you know of Anthony Galla-Rini's career in the musical and theatrical world extending over a period of twenty-six years, during which he has gained an international reputation as an accordion artist, established a chain of schools on the West Coast, and composed and arranged accordion music that is played all over the world -- it is amazing to realize that today he is a charming young man, who has just celebrated his thirty-second birthday! This is, of course, explained by the fact that Galla-Rini's musical education began when he was four -- and he made his professional debut two years later.

Galla-Rini was born into a musical family. Music was his father's absorbing interest in life, and his profession. To each of his children he imparted a love of music and gave them the benefit of his own knowledge and appreciation. He was a pianist, violinist and accordionist. The Accordion -- a chromatic type -- was the instrument on which the young Anthony's education was begun.

Having started his son on his studies, the senior Galla-Rini, with his two daughters, went on tour. Shortly thereafter Anthony -- six years old -- was summoned to join the act in Cheyenne, Wyoming. A real little trouper, he made the long journey from his home in San Francisco entirely alone, taking excellent care of his accordion en route.

At that time Anthony knew but one piece perfectly. It was "Waiting for The Robert E. Lee," a hit tune of that day. The Galla-Rini act ended up with father, daughters, and son all playing this catchy melody on their accordions. Then, one by one, the others quietly left the stage, leaving little Anthony to finish it alone. This proved a great hit. Anthony became accustomed to the spotlight at an early age indeed.

Along with accordion, the child musician studied the cornet. At first he was too small to hold the instrument properly and had to support it on the floor! In his first lesson he learned to play "The Wearing of the Green." Later in his career, Galla-Rini played the flute, trombone, piccolo, Saxophone -- in fact, all of the wind instruments. But always the accordion was by far his favorite instrument.

"As a young child did you ever have to be told to practice?" we asked the famous musician.

Galla-Rini smiled. "Perhaps in the very beginning I needed a little urging, but it wasn't long before I was lost, heart and soul, in music. Sometimes I practiced for eight hours a day, and had to be made to stop for my meals.

"Incidentally," Galla-Rini continued, "I might say that such prolonged practicing is not a good idea, for one becomes too tired physically to derive any real benefit from his work."

Anthony had not been playing the accordion very long when his father learned about the piano accordion, and promptly changed to the newer style both for himself and his son.

In those days there were no instructors for this "novel" instrument, and no lesson books, and for years Galla-Rini's father was the sole source of his musical education. At the age of fourteen, while in New York for theatrical engagements he studied harmony and counterpoint with Professor Van Broekhaven at Carnegie Hall. Not long ago he worked with the noted conductor of Chamber Symphonic Music, Gaston Usigli, to become

Anthony Galla-Rini (b. January 1904) is presently (March 2000) living in California. Although he doesn't pick up his accordion as much as he used to, he still conducts, lectures and presents master classes.

The Classical Free-Reed, Inc. staff gratefully acknowledges volunteer Patrick Kiley, who assisted in the production of this article, as well as Stanley Darrow and his comprehensive American Accordion Musicological Society library.