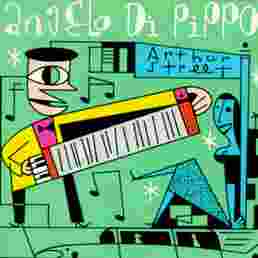 Here is another release by probably one of the greatest jazz accordionists, excuse me, greatest accordionist in the United States of America! [Editor's note: Bob is obviously very enthusiastic; however, his extreme opinion of Di Pippo's playing is not shared by the rest of The Classical Free-Reed, Inc. staff.] Angelo has been playing accordion since he was eight years old and has had a most distinguished career. Not many know that Angelo is also one fine arranger and composer having worked with many of great performers: Billy Eckstine, Connie Haines, Eddie Fisher, Sandler & Young, Robert Merrill and Roberta Peters. His arranging and composing skills have helped him survive during the years of drought when the accordions popularity faded. With credentials like this you know you can expect something special. This CD is proof that the accordion is back with renewed life, and who better than Angelo to show others what it is capable of?

An incredibly versatile musician, I have heard Di Pippo record in a variety of musical styles, and one characteristic always catches my attention: he has one of the crispest playing techniques that I have ever heard. The intimate detail he produces with his fingering impresses me and others who hear his recordings. Here he doesn't let us down. I have to confess, I am not a big fan of jazz, but a recording like this is enough to make me rethink my position. The improvisational skills he displays here are awe inspiring. Among the many admirable tracks, here are a few of my favorites: "What is This Thing Called Love," "Esta Por Ver," "April Showers" and of course the title tune written by Di Pippo himself, "Arthur Street."

As far as the quality of the sound engineering goes, Angelo and his group have been very well recorded and given ample stereo imaging. Surprisingly, the only area that seemed lacking to me was the sound of Di Pippos instrument itself. While I know that he plays a beautiful double tone chamber Bell accordion, the tone was at times a little strained to my ear. I am not sure if it was the miking or the accordion itself, but I heard what sounded like some out-of-tune notes due to note bending during loud passages.

Overall this is a great recording and one that jazz lovers, and lovers of the accordion in general, would do well in adding to their collection.

In my opinion, the sound of Di Pippo's instrument is fine. I'm sure he purposely distorted those notes when he pulled really hard on the bellows. However, I thought the musette tuning was God-Awful! I think personally a subtle violin is much more beautiful. -- Henry Doktorski