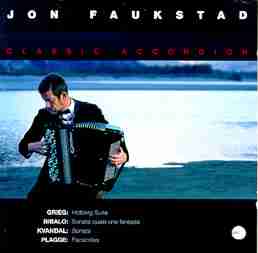 Jon Faukstad has been professor and Departmental head of the Accordion division at the Norwegian Sate Academy of Music in Oslo since 1972. Taught by Mogens Ellegaard in the Royal Danish Conservatory of Music, Faukstad became well versed in the literature for accordion and developed a passion for Norwegian folk music of which he is considered an authority and even published a book on the subject. As a consequence it isn't surprising that most of the "classical" selections on this album bear the imprint of Norwegian folk tradition.

Edvard Grieg is perhaps the most well known of Norway's classical composers. His famous Holberg Suite of 1885 is usually performed as a string orchestra piece though this arrangement was made from the original piano score. The five short pieces modeled after the Baroque dance suite display simple though inspired melodic lines which have been perfectly adapted by Faukstad to fit the accordion's character. The Prelude has lively arpeggiated figures which form a propulsive rhythm over which a tender, brief descending sequence glides. A soft hymn-like Sarabande follows while the Gavotte has a pleasant easy going folk flavor. The fourth piece Air is the longest and most serious of the suite. It's in a slow minor key reminiscent of Bach perhaps because Ludvig Holberg, the playwright philosopher to whom the work is dedicated, was a contemporary of Bach. A lively Rigoudon dance concludes the suite.

The remainder of the disc is devoted to contemporary Norwegian composers writing specifically for the free bass concert accordion. My favorite work on this album (and the least folk music influenced) is Antonio Bibalo's Sonata quasi un Fantasia which was written in 1978 and dedicated to Danish accordionist Mogens Ellegaard (Faukstad's teacher). This one exhibits the exceptional organ-like power of the chromatic free bass, often utilizing the extreme highs and lows of its range. It is haunting and atmospheric with many well thought out contrasts and subtle use of dynamics. It is in four sections which are played without a break. A halting chordal beginning leads to a wild allegro toccata followed by a somewhat menacing development section and finishing with a nice surprising coda based on the allegro material.

Johan Kvandal begins his Sonata for Solo Accordion (1987) with a slow dramatic melancholy Ballade in which the center section drifts into a modal folk-like melody developed in fugal fashion. The second movement has the character of a dance and is structured in rondo form - the strict meter of the initial theme alternating with freer sections.

The three Facsimiles for Accordion were written in 1992 by Wolfgang Plagge. They make nice companion pieces to the Grieg suite as they are made from simple diatonic melodies and could be called neo-classical in structure. There is also humor here. The heavy regal chords which punctuate the Marcato give way to playful scampering lines and trills. The second tune Tranquillo is light and lilting until underscored by deep bass in counterpoint which gives it a wistful quality. The finale Allegro con brio presents a gleeful rambling theme which returns several times at the end including one mock-serious variation accented with bellow shakes.

Mr. Faukstad displays impressive artistry in his playing and obviously loves what he's doing. The folk qualities of these pieces should have initial appeal to many listeners and yet are complex enough for repeated listening. Recording quality is quite good with noticeable separation between bass and treble manuals (some might find that distracting but I like it). The CD could have been longer though it's on par with the older LP format.

CD booklet notes are written in Norwegian, English and French.