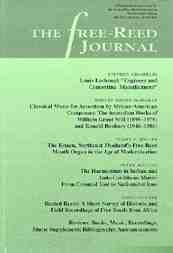 The CSFRI Free-Reed Journal [*] is a gold mine of scholarly yet fascinating information about the free-reed instruments. Once I began reading, it was difficult to put the journal down. The topics of the articles are varied and diverse, both musically and culturally.

Stephen Chambers' 12 page article: Louis Lachenal: "Engineer and Concertina Manufacturer" provides a tantalizingly brief glimpse into the life of the man who revolutionized concertina making in England in the mid-nineteenth century. The second half of this article will appear in volume two of The CSFRI Free-Reed Journal.

Robert Young McMahan's 19 page article, Classical Music for Accordion by African-American Composers, has passed through several evolutions. If memory serves me correctly, he first presented it as a paper at the American Accordion Musicological Society symposium in March 1997 at King of Prussia, Pennsylvania. Then in October 1997, The Classical Free-Reed, Inc. published it as The Accordion Works of William Grant Still on the web pages of our own The TCFR, Inc. Free-Reed Journal. Since then, McMahan completely rewrote the piece and added an entirely new section on the four accordion pieces by Ronald Roxbury. This article in the first volume of The CSFRI Free-Reed Journal is my favorite in the entire journal, undoubtedly due to my own special interest in original works for accordion by American composers.

Terry Miller's ten page article about the khaen — Thailand's indigenous mouth organ in the age of modernization — revealed to me a fascinating aspect of Thai culture: the constancy of the khaen during a period of social and musical transformation (1970-1998). Curiously enough, the art of khaen making has not changed; it is still made from bamboo pipes, a hardwood wind chest, copper reeds sealed with a gummy product called khisut created by a black insect. (Before we Westerners turn our heads out of squeamishness, let me remind accordionists that their own instrument is sealed with a wax created by another insect: the bee.)

Although the music of Thailand has become modernized, the khaen continues to play an important, although symbolic part, in Thai music. Miller wrote about the musical transformation of the last 30 years, "The musical forces had expanded from khaen and a drum set to a substantial rock combo featuring electric instruments (organ, guitar, electric phin), brass, drum set, and — yes — a khaen."

Peter Manuel's eleven page article: The Harmonium in Indian and Indo-Caribbean Music - From Colonial Tool to Nationalist Icon was also especially interesting to me, as I had frequently played the popular hand-pumped Indian harmonium at temple services during my fifteen year tenure with the Bengali-Vaishnava Hare Krishna movement: the International Society for Krishna Consciousness. Despite my experience studying and performing in India and the United States, I had no idea of the controversial nature of the instrument in Hindu society and the heated arguments between the creole and Indian community of Trinidad in the early 1990s regarding which instrument — the steel drum or the harmonium — should be designated as the "national instrument" of Trinidad. I was also entertained by Manuel's description of the blow-by-blow newspaper battle.

Although the five articles were the most substantial part of the journal, the 22 pages of reviews as well as the bibliography and music score (Richard Hunter's Requiem for solo diatonic harmonica), added a great deal. I congratulate editor Allan Atlas for his wonderful contribution to the study of the free-reed instruments and I strongly recommend that all aficionados of the free-reed instruments subscribe to The CSFRI Free-Reed Journal. Your library would not be complete without it.

* For the record, know that in August 1997, when The Classical Free-Reed, Inc. site was founded, I coined the term The Free-Reed Journal for our Internet pages devoted to articles and essays on the free-reed instruments — now consisting of some 47 articles. Perhaps a year or more ago, Mr. Atlas sent me an e-mail letter requesting permission to use the term The Free-Reed Journal for the annual publication of his recently founded The Center for the Study of Free-Reed Instruments based at The Graduate Center of The City University of New York. I was only too happy to grant his request, as I see no conflict; one is strictly an Internet publication and the other is a print publication. To avoid confusion in this review I refer to Atlas' journal as The CSFRI Free-Reed Journal and The Classical Free-Reed, Inc. journal as the The TCFR, Inc. Free-Reed Journal.