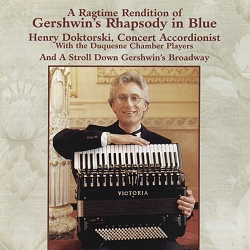 In an All Gershwin Program:

To listen to music excerpts from this CD, Click Here.

In honor of the 100th anniversary of Gershwin's birth I would expect an outpouring of various recordings of Gershwin's music. But I commend this recording for not being a rehash of existing tunes and performances. We are used to hearing the huge orchestral rendition of the Rhapsody in Blue but this performance returns to the original intent of Gershwin's music: a tight, intimate chamber ensemble composed of eleven student musicians and the solo accordion in the spotlight. And the performance recording did an excellent job of capturing that intimate feel through tight miking and thankfully restraint from electronic processing in the form of reverb to make the ensemble artificially "big".

Of course, for most listeners the first thought is, "How different--an accordion instead of a piano!" But after reading the historical liner notes from the CD, one will come to realize that it is actually not breaking new ground as prior performances have included the accordion. In 1928 accordionists Basil Fomeen and Nick Hope recorded the Rhapsody for Victor Records and in 1931 accordionist Cornell Smelser played the Rhapsody in its entirety over a national radio network accompanied by an orchestra of some forty musicians.

The Rhapsody is perhaps the most famous of Gershwin's accomplishments in spite of the less-than-perfect composer's skill that he evinced at the tender age of twenty-five. Critics will point out the lack of continuity between its many themes, make an example of the disjointed transitions and the immaturity of his compositional style, but public popularity is the proof that it has stood the test of time. Certainly, Gershwin's work has survived this with ever increasing interest in this composition. I would be willing to bet that for most people, this is the most recognizable piece of "classical" music in the United States.

While the featured work is excellent, there are some other selections that fill out the CD which are a good cross section of some of Gershwin's popular songs, like "I Got Rhythm" and "'S Wonderful." There are also a couple of excerpts from his operatic masterpiece, Porgy and Bess. While most of these selections are excellent, in many cases the accordion was playing a less demanding and imaginative part than that of the title piece. While I recognize that the Rhapsody was quite an undertaking for Henry and the orchestra, I would have liked to see An American in Paris included, perhaps at the exclusion of the noon Rhapsody selections. I have always felt that the American in Paris was equally as representative of Gershwin as the Rhapsody and perhaps that might be a future project for Henry to tackle.

As for Henry's performance throughout the Rhapsody, I thought it was excellent. He was able to utilize the features of his free bass accordion and accomplished bellows technique to effectively create a performance that highlighted the characteristics of the and the attributes of the accordion.

Kudos on a most interesting and effective recording.

Henry, just received your CD yesterday. Thanks so much for sending it to me! For the most part, I was very pleased with the disc. I listened to it as soon as it arrived since the somewhat damaged tape you sent previously had whetted my appetite for the real thing. Your arrangements on the pop tunes are outstanding. They showed a very crafty handling of the strings and the rest of the orchestra and seemed to me very professional and polished orchestrations. In some cases, I would have given the accordion a little more to do, rather than the one line melodic material, but otherwise, it was excellent.

As far as the Rhapsody however, I must tell you up-front that Rhapsody in Blue is one of my least favorite compositions. I may be considered un-American for uttering such blasphemy against this all-American work, but I have never cared for the piece because of its "start and stop" approach. Gershwin is a treasure for sure, but that many disjunct moods and themes compressed into a very short period of time is very distracting and unattractive to me. That shows a young composer who had not yet mastered the idea of carrying a thought through to the end in one organic and cohesive creation. Rhapsody has always seemed to me to be a mosaic of a number of ideas Gershwin was working on at the time, and he simply decided to throw them all into the soup.

With that said, I still thought your arranging was again quite crafty. Excellent work! You met a rather tough challenge head-on and did a great job. For the most part your performance was very good as well, but there were some sections that sounded like you may not have had enough time to practice before the recording. Nothing the average public would notice, but I noticed because having seen your video and hearing your Christmas CD (both of which were great), I know you could have executed the passages a little more easily if you had had a few more practice sessions. I'm guessing you were extremely pressed for time, however, and needed to organize the rehearsals, the musicians' pay, write and copy the arrangements, get the parts ready, acquire mechanical rights, etc. I don't know how you had time for it all, especially since you had been on vacation recently.

But on the whole, this is an excellent contribution to the accordion world, and once again, you've created a CD that will have great appeal to a myriad of different stylistic tastes. Very fine recording, great playing, great arranging, and well-programmed so that anyone is sure to enjoy the CD. A great contribution. Great job, many congratulations, and I am looking forward to your next project.

It would be dishonest to feign surprise at Henry Doktorski's most recent compact disc, for I was to some degree "in the know" when it came to his plans concerning an album of Gershwin pieces on the free-bass accordion. When I learned the featured work was to be Rhapsody in Blue, I became intrigued with the idea of shifting the solo voice from piano to a free-reed instrument. There would be some problems inherent in this transition that would require creative solutions, but at the same time I found myself excited by the expanded musical possibilities.

It is difficult to take music written for an instrument with finite sustaining power (the piano) and make it work well on one which has the ability to sustain tones indefinitely. The idiosyncrasies of the original solo instrument would be virtually composed into the music; tones that were meant to audibly diminish and recede into the background would remain obtrusively present when played on the accordion, changing the harmonic texture of the piece. To make such a transition work, the performer would have to have a discreet, self-critical ear as well as the ability to judge when to take calculated risks and leaps of faith. Fortunately, Doktorski has both a good aim and a good ear.

His uncanny aptitude for combining a sense of caution and adventure pervades Rhapsody from beginning to end. He manages to unite seemingly opposing camps of musical thought and gives us a fresh perspective on this piece, looking to both better realize a composer's original intentions at orchestration, and, at the same time, breaking with that intention by using a solo accordion! There can be only one reason he was able to do this so successfully; he undertook virtually all creative roles in the production of this recording: orchestra leader, arranger, soloist and producer. From this perspective, he was able to bring a single-minded focus and personal vision to his work.

Yes, as my fellow critics have already pointed out, Rhapsody in Blue is not a composition without its problems, nor is it one that will appeal to all listeners. Personally, Gershwin is not a composer of that has ever been on my 'top ten' list, and in Rhapsody there are no smooth transitions between the rather diverse themes, giving the work a hodge-podge, heterogeneous character. In Russia, sixty or so years earlier, critics leveled the same guns at Tschaikovsky's Piano Concerto in B-flat after its first performances. Yet, in spite of the accuracy of such observations, today these two works are among the best known and most easily recognized pieces of music in the concert piano/orchestra repertory. I think it is not hard to understand why the genius of both composers' individual visions has transcended their not-quite mature compositional styles.

The miscellaneous Gershwin songs that accompany Rhapsody in Blue on this album are easy to assimilate. In Doktorski's ingenious arrangements, the accordion takes on an easy, swinging vocal line with minimal elaboration, an approach that is both fluffy and refreshing after the frenetic "Jazz Age" energy of the main work. No doubt the performer/arranger could have turned each one of them into examples of Art Deco jet and chrome, but I preferred these sips of minted iced tea coming, as does Gershwin's birthday, at the end of a long hot summer!

On its cover, the accompanying booklet features a formal yet friendly picture of Henry Doktorski with his polished Victoria accordion. It is important to me to see a photo of an artist somewhere on his or her compact disk, and this one seems especially welcoming. The excellent program notes, by none other than William Livingstone, the editor-at-large for Stereo Review magazine, are focused and erudite, without a hint of the stuffiness that sometimes accompanies scholarship. They complement the overall concept of the recording very well and add what may be heretofore unknown musicological information concerning Gershwin.

All in all, I found this an interesting, thought provoking recording, solid and well crafted, although it did lack polish, especially in a few of the orchestral passages. Were I to chose a "desert island" recording of Rhapsody for a Gershwin loving friend, this would not be it, but that does not diminish its value. I would recommend it to anyone wanting more than a cursory glance at Gershwin and his contribution to American art and culture. I do not believe the intention of the performer was to supplant or replace what has become tradition; rather, he sought to augment and expand our concept of the work. In that he has succeeded admirably. There is a clarity and honesty to this recording that most grand, orchestral versions lack. Where they obscure the Jazz and Ragtime roots of Rhapsody in Blue with their lush instrumentation, Doktorski and company have rolled up the rugs, wound up the Victrola and given us a veritable "cat's meow" of a genuine piece of 1920's Americana.

I'll admit that I'm not a classical music expert, but I'd just like to say that "Rhapsody in Blue" really moves me. It makes me feel happy and excited. Critics say that it's themes are disjointed and not smoothly connected. I think these people are studying the music too hard and they need to just sit back and enjoy it! Save the analyzing for the classical songs that are meant to be analyzed! I don't think "Rhapsody in Blue" is meant to be enjoyed intellectually. Thanks,

For more information about the history of accordion performances of Gershwin's music, please see the Free-Reed Journal article Gershwin and the Accordion by Henry Doktorski and Bill Lawrence.

Other Reviews of A Ragtime Rendition of Gershwin's Rhapsody In Blue