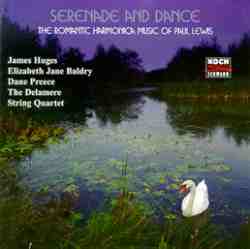 The music of British composer Paul Lewis (b. 1943) is featured on the album. Although Lewis began playing music at an early age, he avoided all formal training in music, yet composed his first television score at the age of twenty. Since then he has composed music for British TV classics such as Arthur of the Britons, Lady Killers, Swallows and Amazons Forever, The Prisoner of Zenda and the smash-hit children's comedy Woof! Recently he has begun composing concert works.

This CD of "light" music is very pleasant to listen to, quite beautiful, for the most part relaxing, and deserving of the designation "romantic music." Most of the pieces on this album were expertly and sensitively arranged by Lewis for various combinations of harmonica, harp, piano and string quartet but some were originally composed for harmonica, such as Impromptu for Harmonica and Harp, Spring Suite, Serenata for Harmonica and Harp (written for Tommy Reilly), and Serenade and Dance, composed as the chromatic harmonica test piece for the 1997 World Harmonica Championship.

Despite Lewis' supposed lack of formal music training, his creativity shines in these short pieces. I do not hesitate to call this CD an album of chamber music. The tunes are memorable; some are introspective and gentle, some are frolicsome and funny, but all are played beautifully by James Hughes and his associates.

The CD booklet notes are written in English and German. I should mention that the editor had some difficulty with English spellings, as several words, including Hughes name on the front cover, are misspelled! I won't complain about that, for I, too, know what it is like to work with a record company. On my recent Gershwin recording, the producer went ahead and printed the liner notes without consulting me; consequently there were several errors.

I recommend this CD by James Hughes for all lovers of the romantic harmonica.