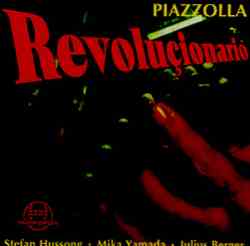 Revoluçionario is Stefan Hussong's contribution to interpreting, understanding, appreciating and honoring Astor Piazzolla. Fortunately for us, a performer of Hussong's talent is probably compelled to devote an entire CD to the master tangoist. Indeed a virtuoso free-reed performer would be remiss not to record the works of perhaps the greatest free-reed composer of all time.

Stefan's distinctive contribution involves applying new instrumentation to Piazzolla's scores. Rather than simply record a cover version by forming his own Tango Nuevo Quintet, he seeks to "bring out the clarity of the structure" of Piazzolla. He seeks to reveal the sophisticated fugue like counterpoint by re-orchestrating these tangos for accordion/piano and accordion/cello.

Hussong always gives you something slightly unexpected to sustain your interest after the first listen. With this recording, he uses a second unique approach to Piazzolla by applying "the interpretive skills of a 20th century composer to re-interpret Piazzolla." And hence, the CD's subtitle, "Tangos by and for Astor Piazzolla." In this approach, the Slovenian composer Uros Rojko has used his talents to write tangos in the style of Piazzolla. What Rojko has revealed in his compositions are the distinctive rhythms, phrasings and structure of his mentor. They don't so much sound like Piazzolla as they feel like him. Indeed the difference (just like in the first approach described above) is between being inspired by the master and copying the master. It is commonplace to use one's technical abilities to mimic someone else. But it is quite another thing to get inside the heart and head of another artist.

So although Hussong is the featured performer on this CD, it is really a collaborative effort between he, the composer Rojko, the pianist Mika Yamada and the cellist, Julius Berger with the arrangement credits being shared equally among the three performers. The sixth tango, Le Grand Tango, is performed by Hussong and Berger. All other selections are performed by Hussong and Yamada.

My challenge in writing this review is to convey in words the feelings created by sounds. Perhaps one way to do this is to mention that the performers tell us the manufacturer of their instruments (and their tuners) — Hussong's is a 1967 Giavanni Gola Nr. 911; Yamada's is a Steinway D; and Berger's is a 1780 G.B.Guadagnini. Liner notes are in English, French, German and Japanese which gives a sense of the audience for this CD. The recording quality, as we've come to expect from Hussong is outstanding. This is a classy production which does not forsake the passion of Piazzolla. It is as if Hussong and company have taken Astor's tangos from the street lights of Buenos Aires to the stage lights of an orchestra hall. It is serious music at the same time that it cries out and dances.