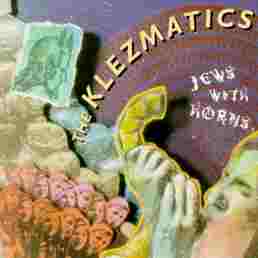 "Klezmer, (which literally means "instrument" or "vessel of melody") dates back to the Middle Ages and draws from religious and folk sources such as Hasidic blessing-dances and polkas, as well as ragtime and jazz. Klezmer is Yiddish party music. After thriving on the Lower East Side in the earlier part of this century, it began to die out as Jews assimilated, and by the 1950s, it was relegated to the musical trash heap of weddings and bar mitzvahs. In the late 70s, klezmer was rediscovered by Jewish folk musicians who'd been inspired by Alex Haley's "Roots" and were looking into their own culture. A klezmer revival began." (from an article by Bob Morris)

Calling themselves "the planet's only radical Jewish roots band," the Klezmatics play the joyful, exuberant music of Eastern European klezmer with a downtown New York flavor. "Jews with Horns" is their third album, a spinning calliope of world music with influences as varied as Latin jazz to experimental rock.

The front album cover attracts attention: a collage consisting of a man blowing on a ram's horn, a chorus of girls, and a print which reminds me of a 17th century woodcut of a horned devil by an anonymous Christian artist: the mythical "Jew with horns."

The back cover photo is in a lighter mood: the band posing in silly positions against a backdrop of a typical lower east-side New York tenement building. Frank London is playing his trumpet from the fire escape while Lorin Sklamberg climbs up another fire escape ladder with his accordion slung over his shoulder.

The music is sometimes wild, sometimes subdued; sometimes boisterous, sometimes melancholy; but always interesting - there is never a dull moment. Although most of the album follows traditional klezmer instrumentation and harmonic patterns, there are also many fascinating and ingenious innovations.

Take "Romanian Fantasy," for example; it could have been written by one of my favorite contemporary composers: Philip Glass. The piece begins with a slow moving piano ostinato based on an arpeggiated Bm chord; a perfect accompaniment to the haunting violin improvisation which follows. Even the trumpet ostinato is in the Glass style: a triplet arpeggio against a duple pulse.

The clarinet solo in Doyna is also exceptional: incredibly intense wailing, accompanied by slow-moving piano chords and bass drums. After some time, the clarinet descended into a lower register and lulled me into a relaxing dream-like trance. I felt that I could have stayed in that place for hours.

However, my reverie was abruptly and rudely awakened by a terrific shout: "Freyt Aykh, Yidlekh" as the next track - "Get Happy, Jews!" - a joyful traditional dance, began. Clever!

Six songs are sung and nine songs are instrumental. All the texts are printed in the CD booklet, in Yiddish (both Roman and Hebrew alphabets) with English translations. Some songs are traditional, some are not.

A traditional (and very serious) song is "In Kamf." It is one of the most popular Yiddish labor songs and was written in 1889. (Sung in Yiddish)

We're hated and pursued,
We're afflicted and persecuted,
Only because we love
The impoverished, languishing people.

We're shot, hanged,
Robbed of our life and our rights;
Because we desire truth,
And freedom for destitute slaves.

Chain us in iron shackles,
Tear us like bloodthirsty beasts;
You can only kill our bodies,
But never our sacred spirit.

You can murder us, you tyrants,
Time will bring forth new fighters;
We'll struggle and struggle
Until the whole world has been set free.

In a completely different vein is the humorous and decidedly non-traditional "Man in a Hat," which is sung (in English) at break-neck tempo by Lorin Sklamberg, who also plays accordion. The song is a humorous glorification of New York City and gay love. ( Although two-thirds of the band are straight, the Klezmatics are supporters of the current rise of gay and lesbian interest in Yiddish culture.)

Sailor man, don't tell me of the seven seas of yore
Java and Sumatra do not move me anymore
Say farewell to Finland, further inland than old Thor
Adios Antilles and so long to Singapore

Having fun in London is like flying on the floor
Isle of Man I'll manage to avoid like manticore
Budapest, I get no rest and Boston is a bore
A man unique to my mystique in New York I adore

Another song which struck me was "es vilt zikh mir zen," written by Celia Dropkin (1888-1956) who was a pioneer of the Yiddish "inzikh" (introspective) movement. The text, sung in Yiddish, is set to a beautiful plaintive ballad melody by Frank London.

After listening to "Jews with Horns" by the Klezmatics, I believe that they are what they say they are: "the planet's only radical Jewish roots band."