The Free-Reed Review
Critiques of Compact Discs, Books and Music Scores
CD Review:
On and Off the Keys Distinguished Performers Series V 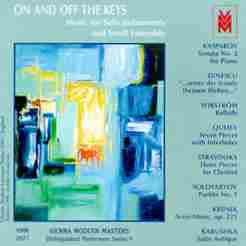 Here is an album that could portend a sign of things to come. The accordion is given a place as a chamber instrument beside the piano, cello, clarinet and horns. It isn't a greater or lesser instrument than the others but is accorded the same respect. A fascinating mix of 20th century concert music, this recording brings together composers and performers of diverse ethnic backgrounds from six countries. The resulting music however is cosmopolitan in its adoption of contemporary classical influences and theory.

Andrey Kasparov was born in Armenia and musically educated in Moscow before moving to the United States. His music has won many awards as has the Piano Sonata #2 which begins the album. It is a twelve tone work which the composer says was inspired by the piano music of Pierre Boulez. It's been a perennial problem for twelve tone composers to make their rows memorable to the listener which is why these works are often more appreciated by other composers with scores in hand. Kasparov however gives his rows some distinctive motivic shape and rhythmic drive though it does come in spurts. It's pretty engrossing and exciting to follow the ups and downs of this piece which offers a few creative surprises. The holding of overtone chords after loud runs to mark the entrance of the second row for example. Another is the absolutely shocking entrance of a plain minor triad at two climatic moments.

The prolific Romanian Violeta Dinescu is represented by her When Tears Flow From Joy for piano and cello. On first listen I thought of a fever dream - a restless person tossing in bed as brief intense episodes come and go. Then I read the liner notes which said the piece is based on "a kind of dream technique." It makes use of "quazi-citations" from Mozart; however, don't expect to hear any outright quotations. The cello takes center stage here, the piano providing support.

Inspired by the myth of Orpheus, Inger Wikstrom's Ballade for Piano is a program piece, somewhat impressionistic. The different characters in the story - Orpheus, Eurydice and Hermes - each have very different themes which alternate as the work progresses. The writing (and playing) is decisive and dramatic though the sections could dovetail more. I would have enjoyed a section where the characters and their themes would be superimposed in counterpoint.

The most original use of the piano is found in Azerbaijan composer Javanshir Quliev's Seven Pieces with Interludes in Mugam Modes for prepared piano. The "prepared piano" is a technique made famous by John Cage where objects (screws, paper clips, erasers, etc) are placed on the strings inside the piano in order to alter the resulting sound. It creates a kind of miniature percussion orchestra. Here the "prepared" sounds are played during the Interludes which are in fast exciting Azerbaijani rhythms. Between the Interludes, the unaltered piano plays very contrasting material, often lyrical and cascading.

The very short wonderful Three Pieces for Solo Clarinet by Igor Stravinsky are from 1919 (the oldest works on this disc). The first is slow and thoughtful with characteristic Stravinskian melodic shape. Next is a faster jazzy exploration alternating high and low register. The third is a direct descendant of the composer's L'Histoire du Soldat with its quirky burlesque rhythms and rapid changing meter.

Heinrich Biegenzahn, the clarinetist of the previous track now proves to be a highly accomplished free-bass accordionist with Vladislav Solotaryov's Partita #1 for Accordion. This 1968 piece is outstanding in power and inventiveness and should be in the repertoire of every serious player. Allegro, the first of four movements, is introduced by powerful forte chords which lead to Bach-like passages over deep pedal tones. Suddenly a cluster chord slides downward and we're into an ethereal passage that might have influenced Sofia Gubaidulina's De Profundis. A burst of deep bellow blasts and the heroic first section returns leading to a minor key coda and a conventional closing cadence. A folk-like lyrical movement, Grave, begins softly with a recurring four note motive. The melodic line builds in imitative polyphony and is climaxed by upward runs. Odd playful pulsations mark the beginning of Andantino. A light wistful theme starts then suddenly the tempo runs down. The theme is restated but the rhythm can't get started. An unadorned deep bass center section contemplates the situation. The pulsations and main theme return to round things off. The Presto movement is a fitting dramatic finale to this piece. Deep growling bass rhythms tug at the upper hurrying figures finally pulling them down. Suddenly a quiet shimmering chord alternates with a lone bass line and a series of peaceful consonant chords. The hurrying figures then again escape upward through runs and glissandos until reaching a chordal apotheosis.

The second accordion work on this album is Ernst Krenek's Acco-Music for Accordion. This one is full startling surprises, fierce contrasts and interruptions. At different times a weird atonal march appears to want to start but is side tracked by yet more material: high piccolo reed passages and staccato chords. Trills and bellow shakes are here as well. It will keep you guessing, although to me its parts seem more important than the whole.

A complete change of sonority is next with Aaron Rabushka's Suite Antique for two trumpets and two trombones. Using the traditional baroque dance suite as a model, Rabushka creates interesting textures with a mixture of tonal individual lines which create often clashing dissonances as they interweave. Allemande is bright and fugal with amusing ornaments creating lopsided rhythms. The Courante begins by using a consistent note value played staccato to give the piece a forward propulsion. Slower tones filter in until being superseded by the initial momentum picked up one horn at a time. A soft muted contrast occurs in the Sarabonde with sustained noble tones creating a curious mixture of highly consonant and highly dissonant harmonies. I think it's somewhat reminiscent of Charles Ives. The final Gigue is full of activity led off by a trombone followed by fugal entrances of the other horns. A sudden series of hushed unisons leads to another fugal subject then a return of the first just before a sudden close.

The high quality of the recording is pretty consistent considering the change of performers and instruments though there is a slight distortion in the loud passages of Kasparov's Sonata. The performers are outstanding and the liner notes are very informative. The label Vienna Modern Masters, with offices in Austria and the USA, puts out a variety of contemporary music from many countries and should be applauded for this in our age of quick commercialism.