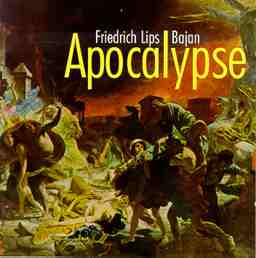 Here is another landmark recording by the great bayan virtuoso Friedrich Lips. His albums often have a cumulative power as the assorted pieces are well chosen to take the listener on a complete journey. Such is the case here. The opening two pieces pair the bayan with cello. Then a quiet solo for bayan alone is followed by a monumental work for bayan and full symphony orchestra. I highly recommend this album for adventurous listeners drawn to challenging and potent music.

The contemporary Slavic composers represented -- in much of the music Lips plays -- never lost that thread of mystical Romanticism leading back to Scriabin, Mussorgsky and many others. No matter how experimental and unique the works might be, they are essentially emotional and have an intense impact. Kilian Wolkow's Stichira of Ivan the Terrible was inspired by a religious verse: "Even though you conquer the world, death carries you of secretly in the end, so why have you sacrificed you soul for your body?" A great lament, the piece sounds both ancient and modern, the result of the composer's interest in orthodox hymns, folk songs and drones. The minor key theme seamlessly evolves through several passionate passages effectively combining the sonorities of bayan and cello to truly dramatic effect. Wolkow's tendency to repeatedly emphasize pedal notes in the bass gives the work a weightiness appropriate to its subject.

Next is Sofia Gaubaudina's amazing In Croce for bayan and cello. Originally written for organ and cello, this is Friedrich Lips' own transcription and it defers in some ways from the version I reviewed in the album of Gubaudulina's music by Elsbeth Moser. Most of the difference however is not in the bayan part but in the cello. In this very well recorded version of In Croce, the cellist, Vladimir Toncha, is exceptionally dyanamic, particularly in the upper range. My only complaint is that in the final passage, the cello goes a little too wild with the overtones, making it hard to hear the notes in the order played initially by the bayan.

Those who, like myself, associate American composer John Cage with atonal chance music and noise collages will be shocked that his Souvenir (1983) is the quietest and most consonant piece on this CD. Almost like the meditation works of Pauline Oliveros, the sparse open harmonies float by, ambient and unobtrusive. Curiously these ethereal passages are regularly punctuated with loud deep tones like the chiming of a large clock. Though this piece is played well, it's too long and languid for my taste.

The death of Sergei Berinsky in 1998 calls for some recognition of the work of this fascinating composer whose Symphony #3 - And the Sky is Darkened (Apocalypse, Chapter 6) concludes this CD. Born in Moldova in 1946, Berinsky's composition career hit full stride in the mid-1970s with several choral and orchestral works as well as concerto-like pieces of which the And the Sky is Darkened (l994) was among his last. He also wrote several pieces for solo bayan, some of which Lips has already recorded: Also Sprach Zarathustra and Three Pieces in "Mauvais" Style. After Berinsky's death, Lips performed an entire concert of Berinsky's music in memorial. A humorous line attributed to Berinsky is: "I should like my music to be stronger than a tooth-ache."

And the Sky is Darkened is a highly expressionistic work inspired by the Biblical apocalypse and the opening of the sixth of seven seals (the sun becomes black, the moon becomes as blood, stars fall to the earth). The bayan here must be amplified in order to match massive orchestral crescendos which the bayan itself must surmount with powerful organ-like passages.

Beginning with a low swirling miasma of bass strings, bassoon and timpani with a wood block initiating rhythmic motion, the bayan soon appears making a loud heralding proclamation with huge blocks of chords. This initial appearance sets the stage for the cataclysmic events to follow. The work incorporates two large sections with ostinato-like figures which act as colossal stair steps upon which ferocious forces ascend and descend. The second of these is an alternating six and seven beat ascending figure leading to a full rush of sound climaxed by pounding drums. There is much sonic contrast here as well, ominous quiet passages and constant creative orchestration - some of it downright frightening. At the end with a final upward chromatic passage of ascending fourths, the bayan itself loses its voice and we hear only the buttons being pressed, its soul of sound having transcended the mechanism of the instrument.

The recording quality overall is fine. And the sky is Darkened was recorded live and so has the occasional coughing audience member. Also in that piece when the bayan first enters, playing what must be chords marked "fortissimo," the resulting volume isn't nearly as loud as it should be. That is corrected later and the bayan assumes its awesome grandeur. Also some criticism should be made about the meager booklet which gives little biographic information of the composers or performers. That being said, this is one powerful recording and well worth acquiring.