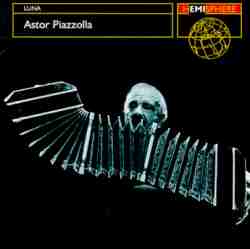 The bandoneon is an incredibly expressive instrument and has been compared to a cross between a button accordion and a boa constrictor. The extremely long bellows give the performer a great reservoir of air in which to sustain tones which can sometimes seem to go on and on forever.

Astor Piazzolla (1921-1992) was an incredibly expressive bandoneonist, a master of the instrument, a master composer and a master of the tango. He became to the tango what Johann Sebastian Bach was to the fugue; he raised the form to a new level of artistic heights.

It was Piazzolla's dream to create a tango that would not only be dance music but also concert music as well. "For me," he said, "tango was always for the ear rather than the feet." His compositions are his great gift to civilization; works of art melding jazz, classical music and traditional popular music with a sophistication which elevate the tango to the level of the concert hall.

Although Piazzolla revolutionized the tango, he never lost sight of it's original home: the slums of Buenos Aires, where it appeared in the 1880s. Like American jazz, it was first heard in brothels among the class of people branded by the upper classes as "lowlife."

Although Argentinean by birth, Piazzolla spent much of his childhood in the Bronx in New York, where he became an accomplished bandoneon player at a young age. In the mid-1950s he abandoned his roots and went off to Paris to study composition with Nadia Boulanger (who taught Philip Glass in recent times and Aaron Copland in earlier ones).

Finding his classical compositions lacking depth of feeling, she reputedly asked him about his own traditions. When it finally occurred to him to play her one of his own tangos, she replied, "This is Piazzolla! you must never abandon this." He combined his love of classical music, jazz and tango and created a new art form.

However, his countrymen were less than appreciative; the tango was beloved to the Argentine people and they did not like anyone to mess with it. When Piazzolla returned to Buenos Aires after his world tours, taxi drivers would refuse to give him rides and musicians even threatened his life. One tango singer actually barged into a radio station were Piazzolla was giving an interview and put a pistol to his head. "I was taking the tango away from them," Piazzolla said. "The old tango, the one they loved, was dying. And they hated me."

This recording is the last concert of Piazzolla's new tango Sextet, recorded live in Amsterdam. (He suffered a stroke in 1991 and died a year later). All the pieces on the album are works of art, but a few deserve special mention.

Track four (Camorra 3) is composed in the form of a rondo, which alternates between a driving tutti chorus (A) and several more rubato episodes (B & C) featuring solo instrumental cadenzas with dissonant harmonic embellishments.

The B section features an exquisite cello solo and the C section features a three and a half minute piano cadenza, full of pathos, which increases in intensity and ultimately climaxes in a devilishly difficult trill of doubled thirds in the right hand. This solo is acknowledged by a well-deserved round of applause from the audience.

The piece finally ends with a rising crescendo (which reminded me of the ending of "Day in the Life" by Lennon/McCartney) and concludes with a fortissimo chord with an indeterminate root.

Track five (Preludio y Fuga) begins with a tasteful five-minute bandoneon duet. Although all are virtuosi of high calibre, the players do not exhibit their abilities for their own sake; the music is foremost, not virtuosity. The musicians perform with a passion and gusto which is sustained throughout the album.

The quartet of bandoneon, piano, double bass and cello is the core of the ensemble. The guitar and second bandoneon are used sparingly, but always tastefully. Sometimes the latter players double on Latin percussion instruments.

I recommend this album for lovers of art-music, lovers of tango & jazz, and lovers of bandoneon.