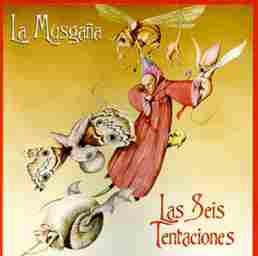 The first thing I noticed about the CD "Las Seis Tentaciones" by La Musgana was the cover: a surreal painting (appearing to me to be stylistically somewhere between Salvador Dali and Albrecht Durer) by multi-talented Enrique Almendros, who also performs on flute, bagpipes & drum on the album. The painting depicts Saint Antonio being attacked by worldly temptations in the form of monsters, hence the title: "Las Seis Tentaciones."

The second thing I noticed was the music: an enchanting celebration of indigenous Spanish music - merged with Gypsy, Moorish and Celtic influences - performed on an exotic combination of traditional and modern instruments. All pieces except for one (El Mirlo) are traditional (and most of the instruments played are also traditional) but the overall sound is decidedly contemporary, partly due to the artistry of Carlos Beceiro on electric bass and Luis Delgado on synthesizer / keyboards.

The other tracks are dance numbers, with the percussion instruments playing prominent parts. Dances include the charro, fandango, charrada, mudanza, pica, seguidilla, waltzes and charro salmantino.

Although the accordion is not a regular solo instrument in the ensemble, it is, never-the-less, featured prominently in the acordeon / trikitixa (diatonic Basque accordion) duet which begins track 12. The acordeon (played by Jaime Munoz) appears only once on the album ( in track 12), but the trikitixa (played by guest artist Kepa Junker) appears in three other tracks: 2, 10 and 11.

I found "Las Seis Tentraciones" to be a truly pleasing and delightful listening experience and I think you will also.