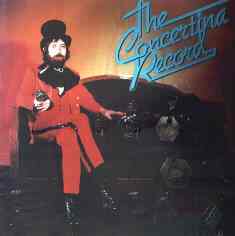 This is a curious album, a conglomeration of disjointed styles, all featuring the English concertina. The music was recorded from 1975 to 1979 and released as an LP by Kicking Mule Records in 1980. The featured performer, Lea Nicholson, wrote, "The intention was to make an album featuring the English Concertina in a variety of different musical settings." I cannot disagree with that! The settings are certainly varied.

The Liberty Bell, a rousing Sousa march arranged for two bass and three treble concertinas, was so successful that it was used in one of the special television programs made to celebrate the 30th anniversary of the original Monty Python series. The recording reminds me of what I imagine the Salvation Army Concertina Bands must have sounded like; it has a flavor not unlike a calliope. Lasst Uns Erfreuen, the famous hymn tune for All Creatures of Our God and King reminds me of a church harmonium. The Renaissance flavored Courtly Masquing Ayres sounds like it came straight from Merry Old England, and it did. The 17th century British composer John Adson (?-1640) is best remembered today for his Courtly Masquing Ayres, (1621) -- a favorite for early music ensembles -- composed for five and six parts, for violins, consorts and cornets. And now for concertinas! To see an HTML reproduction of the original sheet music cover, see http://www.gate.net/~shipbrk/adson.html.

The other tracks on the CD include other instruments. Kobya is an energetic Yugoslav dance in 7/4 time recorded with guitar, sleigh bells and bodhran. Lea Rigs is pure and simple folk music, concertina and guitar; something I might like to hear at a contra dance, perhaps. Dam Buster's March was originally released by Virgin Records as a Christmas single and includes drums, synthesizer, guitar, as well as treble and bass concertinas. Like the Sousa march, it has a carnival carousel-type flavor. The pumping concertinas and ARP Odyssey synthesizer have an incongruous effect. Startling, to put it mildly. I'm not sure the result is tasteful.

Certainly the worst tracks on the CD in my opinion were the Glenn Miller Medley and Bach's Brandenburg Concerto. Not just one movement of the Bach, but all three movements! It was so bad I couldn't wait for it to end. The problem here is that Nicholson bit off more than he could chew. The Miller medley doesn't swing; it drags (with the exception of Chattanooga Choo Choo). And the Bach is sloppy; no question about it. Of course, I understand it is incredibly difficult for one musician to record four or five concertina parts one at a time using sound-on-sound technology; it is nearly impossible to keep the separate parts in strict time, especially if he is struggling to play music which is just a little bit beyond his reach.

I doubt if this CD will improve the image of the concertina as a serious instrument. Yet, despite it's weaknesses, I suspect this CD will be appreciated by beginner and amateur concertina players. Nicholson is most convincing in the folk tunes.

From the editor Thomas Fabinski:

Mike Oldfield is of "Tubular Bells" fame. And Rod Argent is of the 60's rock group - Zombies - who had success with the tune "She's Not There." Rod is classically trained. Just thought you'd wanna know.