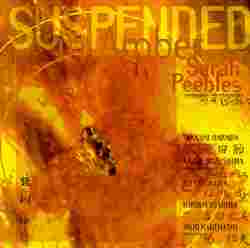 This is among the few truly provocative meditation albums. It's an inspired mix of live music and nature sounds, and a contemporary showcase for the Japanese sho which is said to provide a path for deities traveling between this world and beyond. Sarah Peebles manages to avoid the stereotypes of 'new age' and 'space music' while capturing an intricate and intense spiritual presence.

Peebles is a performance artist based in Toronto and has done work in both North America and Japan as well as Europe and Australia. Her work is marked by collaboration with musicians, dancers and visual artists. However, the material on this CD certainly stands on its own. She has studied the gagaku tradition out of which the sho has emerged with its characteristic voice - a thin, spidery, ethereal tone essential to the effect of this music.

Blue Moon Spirit is a sho solo which explores Peebles' study of gagaku performance (read Henry Doktorski's informative essay on this music). There is no western tonality here (nor in any of the music on this CD) and the slow harmonies change and pulsate in fascinating ways.

The six part Revolving Life is a recording of a performance piece presented in Japan set within the grounds of a temple. She makes reference both to Japan and her own home along the Great Lakes in North America through the calls of the loon and the lapping of water. The sho, bubbling swirling water, whistling tubes, bells and birds share the shifting sonic stage against a backdrop of crickets. One gets the sense of passing seasons, cycles of intensity and repose that the title suggests. Though ambient in effect, there is really much to listen to here and many contrasts.

A description of the sho as depicting the shape of a phoenix resting her wings inspired the title of the next track, Phoenix Calling. Two shos are used here along with a bugaku percussion ensemble providing a slow irregular pulse. Dissonant intervals (including half-steps and tritones) are traditional to gagaku music and are heard in this piece in a stately evocative way. Peebles calls it a "celebration of Woman."

The "Ondes Marenot," a Theremin-like electronic instrument has had a venerable history in concert music, most famously in the work of Olivier Messiaen. It is featured along with the sho, various folk toys and other electro-acoustic sounds in the final track, Aqua Babble. This one is really a journey of contrasts and cannot be relegated to "background music" as some of the other works might be by a careless listener. Even so, without thematic links, this selection seems more patchwork and ragged than the others. Much of the tambres are of the "metallic" shrill quality, leading at the beginning from the ghostly wail of the Ondes through an environment of buzzing and creaking forms. Since the sho also has a metallic quality, the two go well together though the Ondes is the most prominent - its effects ranging from a high chirping to a deep cello-like tambre.

A well written, nicely designed and illustrated booklet is provided. The CD's recording quality is excellent and creates an intimate contact with many of the sounds through close miking. There is a physical presence and immediacy to this recording which is fitting considering the music was created out of performance art. Recommended!