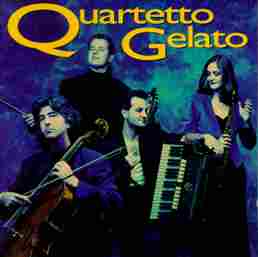 In April of 1993 the author had the pleasure of hearing a live performance of Quartetto Gelato at the International Accordion Festival in Toronto which featured some of the greatest virtuosi of the free-bass accordion in twelve concerts of mostly very serious music. I heard Ole Schmidt's "Concerto for Accordion and Chamber Orchestra" with the late Mogens Ellegaard and the Esprit Orchestra, R. Murray Schafer's "Concerto for Accordion and Orchestra" with Joseph Macerollo and the Toronto Symphony Orchestra, plus other accordion & orchestral works and numerous solo and chamber music recitals by Friedrich Lips (Russia), Matti Rantanen (Finland), Miny Dekkers (Netherlands) and Hugo Noth (Germany).

Yet which concert brought down the house with the most racous applause and cheers? The local group Quartetto Gelato.

The author was completely unprepared for the royal banquet for the ears. My reactions ranged from amazement to blissfulness; from laughter to tears. The group is simply great, and although their first album cannot capture their remarkable stage presence ( their show reminded me of a classical night-club revue - tasteful and sophisticated entertainment fit for kings and queens), it does succeed in capturing their music.

And what music! This is chamber music at its best. The arrangements are exceptional, the performances superb, with just the right balance between instruments.

All the performers are great players in their own right. Cynthia Steljes (oboe, english horn) has performed throughout North America, Eastern and Western Europe and the Middle East in concert and radio broadcasts as a soloist and chamber musician. Her technique shines during the difficult oboe solo in "Concerto Sopra."

Peter De Sotto (violin, mandolin, voice) learned to play violin by ear and his youthful interests included jazz, rock, bluegrass and gypsy music. He later adopted a more classical approach to the violin and was a member of the Toronto Symphony for ten years. He has been singing professionally since 1986 and has appeared as a soloist with numerous orchestras. His violin solo in "Russian Medley" is brilliant and his singing of "Danny Boy" brought tears to my eyes.

Claudio Vena (viola, accordion, arranger) is presently the principal violist and assistant conductor of the Miss Saigon orchestra in Toronto. Although his accordion technique is not exceptional, his playing is none-the-less tasteful, effective and full of life, especially during his solo in "Dark Eyes."

George Meanwell (cello, guitar) was an active chamber musician in Winnipeg and is currently a member of the Phantom of the Opera orchestra.

A few months ago, my mother called me long-distance from New Jersey and said, "Henry, guess what! I just heard a terrific piece on the Philadelphia classical radio station that featured accordion!"

I replied, "What was the piece, Mom? Who performed it?" She said, "Gee, I don't remember. Sounded like chamber music. There was a violin and maybe an oboe also. But it was great!"

"Mom, try to remember their name!"

"But what was their name?"

"I've got it: they were called the Ice Cream Quartet!"

"Mom, you must mean Quartetto Gelato!"

"Yes!" She concluded, "That's it! Quartetto Gelato! and they were great!"

So there you have it, dear readers; if you don't believe me, at least you can believe my mother! Chamber music lovers - buy the CD; you won't regret it!