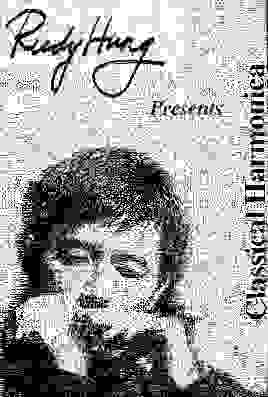 For information about purchasing this video, please contact Rudy Hung directly via Net e-mail: Rudy@BAF.MSMAIL.Cuhk.edu.hk
Distribution channels have not yet been confirmed.

While primarily an accordion and organ player I also dabble in harmonica. I have always felt that most people are unaware of the beauty of sound from a well-played harmonica. While there are many performers on harmonica, most people tend to think of it as a Blues-only instrument. That is a shame because it is capable of playing just about any music including the most demanding classic music. Famous harmonica virtuosi like Larry Adler have shown that to be the case.

The video consists of three camera angles of a performance of the artist and the accompanist on a grand piano. There is no audience and the various selections are each marked with an overprint of the composer and title. After seeing this video I wonder why more artists haven't done this; it is incredibly effective. Watching this video gives one the impression of actually attending a live concert. Special kudos to the camera work, producer and tasteful video editing. Also thanks to the fine pianist, Edmund Summ, who provided just the perfect mix of sound and didn't overpower the harmonica.

Rudy Hung is an associate professor in decision sciences at a university in Hong Kong. He calls himself an amateur, but this performance is professional in every way. He says he is mostly self taught - he had a good teacher!

He plays a Hering 12 hole chromatic harmonica. He says that he prefers this type of harmonica to a 16-hole type because he thinks it gives better sound at the low registers. The instrument was miked using a stand-mounted Shure microphone. It seems that some sound processing (reverb) was added to open up the sound. In any case, the recorded sound was gorgeous, although the meticulous artistry that Rudy demonstrated had a lot to do with that!

So, how did I like this video? Well, to get to the bottom line, this is one of the finest performances I have ever heard on any free-reed instrument. As was already mentioned, the video work was excellent, but the music was fabulous. When I first received this tape I put it on my home video player and started it up. Within a few seconds my wife (a concert pianist), and two young children (2 and 4) came into the room and sat through the entire 80 minute performance, remarking how beautiful it was. After it was done my wife asked to rerun it again! Obviously she was impressed. I should note that she tends to be quite critical of most recordings and has very high standards. About the only criticism I have is that some of the dynamics are a little suppressed, but that is perhaps due to the limitations of the harmonica. Throughout the various selections the sound of the harmonica reminds one of a very fine woodwind, flute, or violin. Many of the selections were originally intended for these more 'mainstream' instruments, and yet the harmonica doesn't give up anything to them in this production.

There is a long list of delightful pieces on this video and all of them were played excellently. But as always there are some that stand out as particularly moving. The Tartini Largo was thrilling and gorgeous. Another favorite was the Paradis Sicilienne that sent chills up my spine. I was particularly happy to see one of my favorite selections, Bizet's Menuet, included. I myself have played that selection and found that all of the nuances included in the composition were faithfully and musically performed. There were a few pieces that allowed Rudy to really show his ability, as for instance, his shining performance of Chopin's Nocturne.

I don't believe that an audio-only tape is available of this performance, but I would strongly encourage Rudy to consider producing one. I, for one, would be very interested in purchasing it.

Although I do not disagree with Mr. Berta's evaluation of this video (Mr. Hung's harmonica playing is beautiful -- even gorgeous at times); I had a completely different reaction which I wish to share with readers!

Now I'm not saying that Mr. Berta is wrong and I am right; I am simply expressing a contrasting opinion.

When I started the video, I, too, was impressed with Rudy's performance of the Tartini Largo, although I must admit that I thought that the volume of the piano was way too low, so much so, for instance, that when I left the room I could not hear the accompaniment anymore, only the harmonica. This is, perhaps, a matter of personal taste; I simply like to hear both instruments of a duo equally well.

The second piece, the Tartini Adagio, I enjoyed as well as the first, but after hearing the third and fourth and then the fifth piece, I understood that all the pieces had the same slow tempi! Everything was largo, or lento, or adagio, or andante, and perhaps even a moderato, but there were absolutely no vivace, presto, or even allegro pieces on the program (with the exception of one: the Mozart Rondo alla Turca). After the first three selections, I was dying to hear a fast, lively tune; anything to break up the monotony!

My kids came into the room and also sat down and watched; for about three minutes. Then they left for more interesting activities. I endured the video for about fifteen minutes, after which I grew so sleepy that I decided to go into the next room and lay down on the bed. I remember hearing the twentieth-century popular standard tune by Tohny -- Moon -- which was strangely inconsistent among an entire program of works by eighteenth and nineteenth-century composers. After a few more minutes I conked out completely and enjoyed a refreshing nap.

My conclusion? This album makes great background music, but I couldn't sit still and watch the whole thing. It put me to sleep. I really wish Mr. Hung had added some zippy tunes to add some contrast to the program. Perhaps I do not have much mental abilities of concentration, but I do think that a professional musician would never have programmed a concert of such slow pieces.

REPLY from the performer:

Glad that you had seen my video. I have the following responses to your review:

1. That the solo instrument's volume is much louder than the piano's is not uncommon in many recordings. As long as the piece is not a real duo (as for some sonatas), this is actually quite good since this lets the solo sound stands out. I wanted to create the impression that the harmonica is a really loud instrument, though the reality is otherwise.

2. That most of the pieces are slow had never come across my mind because I enjoyed playing them so much! (I guess my program is far more interesting than many other programs. Have you listened to Chamber's Music that touches the heart?) I would select faster pieces for my next video. However, don't think that those slow pieces are easy. Some are very difficult and I believe no one else is able to play them on the harmonica unless they have discovered my tricks.

3. The "pop" pieces I included are of high quality. I played them in classical style and I think they blend well with other pieces. Have you heard of the young violinist Vanessa-Mae? In her concerts, she plays both classical and pop pieces and the overall effect is sensational.

4. Neither you nor Bob discussed my techniques. In the video, I've played things that are thought to be impossible for the harmonica. For example, "impossible" double-stops and "impossible" trills. That is why you haven't heard others played most of the pieces that I played. Other players play what is suitable, but I play what is beautiful even if I have to go through a lot of agony. I don't think you would ever hear me play one of those harmonica concertos (certainly not Romance for Harmonica) that hardly anyone cares.

I hope you would find something exciting about the video when you play it again. If I were back to my teen when I was learning the harmonica and I saw a video like mine with a guy playing "impossible pieces," I surely would go excited, if not crazy.