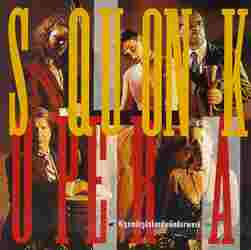 Squonk (what a name! -- perhaps a cross between skunk and zonk?) had their 1992 premiere performance at the Bloomfield Street Tavern in Pittsburgh, Pennsylvania; a Polish bar and restaurant I have been known to frequent on occasion where you can order such Eastern European delicacies as kielbasa (smoked Polish sausage flavored with garlic), pierogies (fun-filled pasta pockets), and czarnina (soup made from the blood of a freshly-slaughtered duck mixed with vinegar to keep it from clotting). Yum.

After having been born in a Polish restaurant, is it any wonder that Squonk now exhibit their inordinate affection for exotic food by titling their first release on a major label Bigsm顤g廛b鷨dw𤦂derwerk? What gourmet treats lie in store for the hungry listener? What delectable delights to titillate the palate? Check out the lyrics to the first track, drank big drink:

Musically, Squonk offers the discriminating listener no less than a banquet of sounds to entice the ear. (You should know that Squonk is a theatrical group; the visual array plays perhaps a more important part in performance than the music.) I witnessed a Squonk "performance" in late 1995 at a club somewhere in Pittsburgh's Strip district and marveled as the performers crawled onto the stage dressed in gigantic slug costumes. Neat. Indeed, the Washington Post wrote about them: Debussy Meets Godzilla. Yeah, it's something like that.

Although a Squonk performance is certainly a theatrical show, the music deserves attention for its own merit; I imagine this CD is comparable to a soundtrack recording of a Broadway show. Did I mention that Squonk recently returned from a series of performances on that hallowed New York street?

First, Jackie Dempsey's compositions are something else (see end note 1). I won't call it progressive rock, but the music is progressive and it rocks. Perhaps contemporary classical avant-garde might work if we have to attach a label. She taught piano at the University of Pittsburgh and was composer and artist in residence at Capital and Towson State Universities.

Second, Jana Losey's soprano voice is another distinctive and attractive element of the Squonk sound. (She studied voice and dance at Ithaca College.) It is childlike in quality (not like the dramatic sopranos that we normally hear at opera performances), and rarely extends in range more than an octave. In addition to singing nonsense lyrics she doodles on nonsense syllables, treating her voice like an instrument. Kinda like an organ pipe. Very little dynamic contrast. On, off. On, off. On, off. Nonetheless, I fell in love with her voice. (I have a weakness for sopranos.) Yet, when she wants, she can sing with a tough gutsy voice. Versatile. I should mention an exciting section when she simply breathes in and out sans vocal chords and changes pitch of air by changing the shape of her mouth.

Third, T. Weldon Anderson's double bass (he performed with the Chicago Civic Orchestra before he was kidnapped by Squonk) contributes it's own characteristic to the group. If he played an electric bass, I might call this a progressive rock group, but he doesn't, so I can't. To top it off, he plays arco most of the time. Not rock. Not jazz. How to categorize? It is Squonk.

Fifth and sixth are the percussion stylings and windwork of Kevin Kornicki and Steven O'Hearn. Kornicki doesn't play drums, he plays percussion; a subtle but important difference. O'Hearn's flute playing is exciting; sometimes even virtuosic. Unfortunately, I was not so impressed with the electronic winds; they just don't seem to have the beauty and sensitivity of a real trumpet or trombone or whatever. I wished that I was hearing real brass players. I get the feeling that Bigsm顤g廛b鷨dw𤦂derwerk could be orchestrated for symphony orchestra. Dempsey's arrangements are certainly orchestral in nature. To record an album with orchestra is, however, prohibitively expensive. Nevertheless, I hope in the future, as the group becomes more and more successful -- and more and more wealthy -- that they will consider this option, at least for their recordings.

I should warn free-reed lovers in Net-Land that, although the accordion appears on the cover of the CD, it is featured in only one track, What stirs, (see end note 2) and then it is used only for accompaniment. Despite this paucity of accordion material, I believe this CD still merits mention on the pages of The Classical Free-Reed, Inc. For one, they teach us not to take ourselves too seriously! To see their schedule of performances, go the Squonk Opera website. The website is cool, worth a visit. In addition, you can listen to three songs by going to the Angel Records site. I think if you listen, you might become a squonk fan yourself.

End note 1: Jackie Dempsey wrote, "I actually play accordion on 2 tracks - Touched is the other one. It's hard to hear because I'm doubling the accordion with organ. I hope to play much more accordion on the next CD. I got a new one from my accordion teacher in NY. Just a little note for you - the show opens with my playing old standards and polkas on accordion for about 15 minutes out in the audience, wearing a tip jar on my bottom so as to collect tips. Broadway was not prepared for shenanigans such as this."

End note 2: Dempsey continued, "As for being the composer, I am, but I do work collaboratively with the other Squonkers. Everyone contributes (and, on a few pieces, I simply oversee and make arrangement suggestions) to their part and I critique and cut and paste and put it all together, arrange it, and actually bring in the foundation and the main ideas. So, I am the composer, but I work with the group. It's not as if I come to rehearsal with written parts for everyone." (from an email letter to the reviewer dated 9.23.2000)