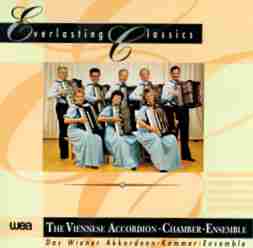 When I first received this CD and played it I was put off by the track numbers which didn't agree with the CD liner notes. This is a small matter but you would think that the producer would go out of their way to leave a good impression with the potential customer.

I also noticed something unusual (at least in my native United States) in the ensemble: an electronium. The electronium is an electronic accordion; one of the first developed, actually, some thirty-some years ago. It is rapidly being replaced by MIDI accordions, which are much more advanced in technology, but the electroniums are still apparently popular in Europe. Some composers of accordion orchestra works even wrote special parts for electronium, so it has a tradition in original works for accordion ensemble. The only American accordion ensemble to my knowledge to use an electronium is The Westmont Philharmonia Accordion Orchestra directed by Stanley Darrow of Haddon Township, New Jersey.

As a MIDI accordion enthusiast I didn't feel bothered by the use of the electronium, but some purists may have a problem with a recording which makes no mention of this non-acoustic accordion instrument inclusion. I understand that they tend to be problematic in that they like to drift out of tune, but I must confess that the electronium in this ensemble sounded perfectly in tune to me. Now that I think about it, this CD just might be a great introduction to the electronium.

Enough of my diatribe about the pros and cons of the electronium! Let's get to the meat of the recording: what does it sound like? Wow, what a neat recording! The audio quality is extremely good (although the applause between numbers suffers from the effects of a compressor or limiter). This has to be one of the most effective accordion ensembles I have heard. The selections are of well known classic selections and performed beautifully. The addition of the electronic sounds provides just the right touch to compliment the excellent playing of the accoustic accordions. I was impressed with the seamless blending of all the instruments, the technical and musical proficiency of all the performers. This CD rates my highest rating.

While there are many familiar jewels on this CD, several stand out for their fine interpretations. Being a huge Mozart fan I was pleased to see The Abduction from the Seraglio included and found the interplay between the different accordions and their selected reeds to be most delightful. The accordion is unique in that it can provide, through reed selection alone, soaring high tones, deep emotional lows and thundering full orchestral combinations. Mozart was one for exploring instrumental textures and interactive dynamics between individual parts. This selection by the ensemble does a great job of showing off Mozart at his finest. Another standout was the Tschaikovsky standard, Waltz of the Flowers. Like many musicians of my generation I was first exposed to Tschaikovsky at a very young age through that Disney masterpiece of animation and music, Fantasia. While it may seem strange to remember a cartoon when hearing music, I fondly remember how the magic of music was revealed to me at an early age. Happily those same memories were revisited when hearing this beautiful and moving arrangement. The other selections range from the very elegant Voices of Spring by another of my personal favorite composers, Strauss, to the fire and spirit of Brahms'Hungarian Dance #5. While many accordion ensembles attempt to perform classical music there are few that can achieve the level of performance of this group in an arrangement consistent and faithful to the composer's original intent.

I was so impressed with this recording I brought it to a rehearsal of my own accordion ensemble (San Francisco Bay Area Accordion Club). All of the members were impressed with the beauty of this recording and the impeccable ensemble playing. Several members remarked that the musicians obviously had a real affinity to the compositions they were playing as there were outstanding musical interpretations of each selection. There isn't a tune on this CD that we found lacking in any area.