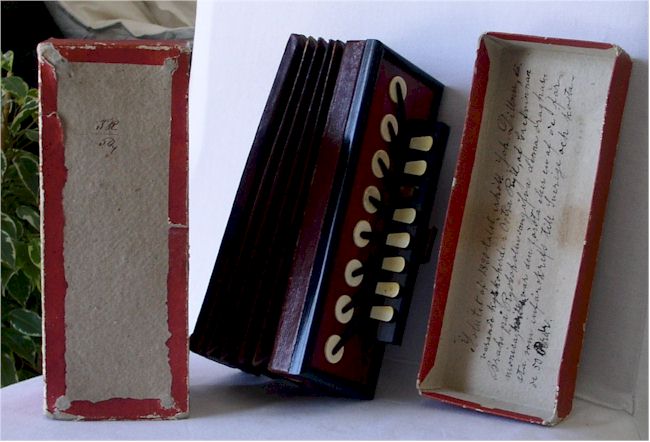 Editor's Note: To view various aspects of Mr. Dillner's accordion, please click on the the buttons provided above.

HENRY DOKTORSKI: I am extremely pleased to meet you (via e-mail) for an exclusive interview for The Classical Free-Reed, Inc. website. I understand that you are the owner of a very historic German accordion which appears to pre-date the original Cyril Demian accordion of 1829. Before we begin talking about your accordion, please tell me something about yourself.

FREDRIK DILLNER: I am of Swedish nationality. My ancestors on both my father's and mother's sides are genuine Swedish. I am 59 years old and a proud father of three lovely daughters.

I was brought up in a very conservative family in a high society area, i.e., the villa was filled up with antiques of all kinds.

Doktorski: The accordion was hidden in the villa somewhere?

Doktorski: How did you discover and acquire the historic accordion?

Dillner: The villa was finally sold and the family split and I became a happy owner of an accordion which I did not know much about. I kept the accordion in a drawer until 1975 when I became curious and went to MUSIK MUSEET in Stockholm. They borrowed the accordion for a couple of months but I brought it back as they did not agree to cover any insurance whatsoever. Apparently they did not like the instrument and their only comments was "this accordion is probably one of the oldest in Sweden." They did not take any photos as far as I know.

So I brought the accordion back home again and after another 20 years (I am not sure of the exact year) Mr. Bo Nyberg from Dalarnas Museeum in Falun called me and asked if he could take some photos of the accordion. He stayed for a whole day and must have taken hundreds of photos.

In August 2005 I decided to call the MUSIK MUSEET in Stockholm again and I was very pleased to hear that the museum was operating under new management. I spoke to Mr. HANS RIBEN and told him about the accordion, the stamp on the instrument, and what was written inside the case. He said, "I have never heard about the accordion but please bring the accordion and we will find out."

He was very well prepared for the meeting and looked at the accordion and the case and said, "I think I have the answer," and he was perfectly right as I can understand it. He gave me all the information about Friedrich LOHNER and references to various books. So he is the MASTER, not me.

After that I went straight home and continued my investigations on the internet and found out that the first accordion was supposedly invented in 1829 by the Viennese piano and organ builder Cyrill Demian and his sons. I thought that was very strange as Friedrich LOHNER, the builder of my instrument, was born in 1737 and died in 1816.

Anyway, I have very recently found out that the former director of MUSIK MUSEET Birgit Kjellstrom in 1976, the year after they borrowed the accordion, wrote a book about accordions. The accordion is mentioned under the heading "Swedish accordion history" and then she quotes what is written in the lock of the case. Nothing is mentioned about the stamps on the instrument or the history before the accordion arrived into Sweden. Then she writes a couple of lines about JOHANNES DILLNER (named in the lock) and the PSALMODICON. That's all.

So, in other words, the accordion is known since 1976 but no one, except me, has ever cared to find out anything more. You can read about it here and there on the internet as "one of the oldest accordions in Sweden" or in connection with JOHANNES DILLNER and the PSALMODICON.

Doktorski: Tell us exactly what are the inscriptions on the instrument and in the case?

Dillner: The instrument is inscribed with the words: "F. LOHNER NURNBERG."

The Swedish handwriting inside the original case describes the early history of the instrument. A free translation of the text in the lock of the case is: "At the end of 1820's Johannes Dillner, the former priest at Ostra Ryd, received this accordion from Countess Brahe at Rydboholm as a gift and it was the first or one of the first brought in to Sweden and cost 50 Rrd.r."

Johannes Dillner was my great-great grandfather and lived between 1785 and 1862. You will find a lot about him on the internet. He, as I understand, invented the PSALMODICON. Countess Brahe belonged to the Royal Family.

For further references about F. LOHNER see The New Langwill Index (1993) end of side 238 and beginning of side 239.

Doktorski: Would you consider to sell the accordion ?

Doktorski: Well, Mr. Dillner, thanks to you and your ground-breaking research, we may all have to change all the books and re-write the history of the accordion!

Editor's Note: In regard to geneology, Henry Doktorksi submitted the following in January 2007:

Son of a turner, 1752 admitted master, 1764 on marriage described as oboe, flute and bassoon maker.

Taught by his father (1) : 1792 admitted master. According to Nickel, ? taught also by J.F. ENGELHARD, whose influence the Nickel detects on an oboe.

Possibly absent from Nurnberg for a period after 1820, but back in the city by 1829. Although Nickel identifies him as the maker signing as F. LEHNER , some of the WWIs listed below appear to be earlier and thus ? attribute to (1).