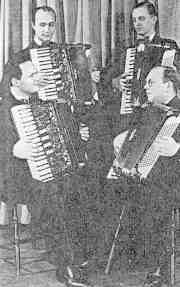 History Is Made At Carnegie!

This article was reprinted in its entirety from the March 1939 issue of Accordion World (New York).

YE LOVERS of Accordion! Have you yet heard about the biggest single event to occur in the world of the accordion? Well, it is on the horizon now; it's the Charles Magnante Accordion Concert which will be held in Carnegie Hall, -- the first time the accordion has invaded this long famous musical sanctum. The evening of April 18 is the date.

On the program, too, will be the Magnante Quartet of which, I am happy to say, I am a member. Gene Von Hallberg and Abe Goldman complete the foursome. The Magnante Quartet was formed several years ago to appear as a special guest feature on Lucky Strike Hit Parade. It was then that Mr. Magnante realized the value of presenting a serious all-artist ensemble, one which would augment the musical possibilities and provide unlimited scoring opportunities for the accordion. They have completed many transcriptions for Columbia, have had their own sustaining program, and appeared with Major Bowes Capitol Family, Lucky Strike, Fred Allen's Town Hall Tonight, and others.

Already we are hard at work preparing for this event, which certainly should make accordion history. The first half of the program will consist of compositions by such great composers as Bach, Beethoven, Mozart and Tschaikowsky. The second half includes a lighter type of music. Magnante will give a number of solos, and will be one half of a duet with "yours truly" as the other half. I also will appear as soloist as well as with the quartet. One of the important numbers planned by the quartet is Bach's "Toccato [Toccata] and Fugue in D Major," . . . But if I tell any more you'll be knowing more about the concert than I do, so I'll be seeing you at "Carnegie."

Now, after talking about an event that is meaning work and lots of it, I want to bring up a point about study in the early stages of musical training. I often have pupils who feel that giving much time to scales, arpeggios, etc., is not necessary. If they are not convinced before of the error of such notions, let them wait till they get working outside of music school and without a teacher standing over them. Fundamental studies are the backbone of any musical instrument, and these exercises and studies are what makes it possible for the accordionist to sight read, divide correctly, and to play musical passages clearly. Lucky is the student who does realize the importance of these studies, for he will surely find his "pot of gold" at the end of the rainbow.

Now get out your date book. and put a big red circle around April 18, for we're hoping to see many, many of your smiling faces at Carnegie. Until then, happy studying!