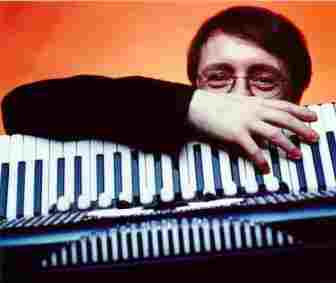 Hussong: Thank you! I will tell my webmaster!

TCFR: I hope we aren't overwhelming you with our list of questions. They're a little more technical than the interview questions at http://www.arttowermito.or.jp/music/hussinterview.html. It's been a joy to listen to your wide-ranging musical repertoire. Please share with our readers what draws you to these various musical genres. Do you feel any special affinity to a particular musical style?

Hussong: Actually it's the instrument's capabilities which draw me to these various musical genres. The accordion has so many possibilities, colours etc., which always reveal to me some new side and that makes me want to "test" it with different musical styles. Yes, I have a special affinity for good contemporary, baroque and pre-baroque music. But my absolute favourite is the music of Schubert, which can't and shouldn't be played on the Accordion (unfortunately).

TCFR: What brought you to record John Cage? It seems like an unusual departure for someone who has the technique to do Bach. Was your motivation a desire to simplify away from the technical demands of classical music? Did you have difficulty convincing Denon of the "Dream" project?

Hussong: Cage's music always fascinated me, since I got in touch with traditional Japanese Gagaku-music during my studies in Tokyo in 1989. I love Cage's concept of "indetermination," which is so different from many (tight-controlled) contemporary music tendencies in middle Europe (Darmstadt school etc.) His beautiful sounds and "mysterious" approach to time and timing, his open minded way of experimenting with sound and his generosity towards Art in general are quite unique and make him one of the most creative artists of the 20th century. His pieces for Sho, the music for violin and keyboard (which I recorded with Irvine Arditti) as well as the pieces recorded on "Dream" are perfect for the instrument. Regarding simplifying: I don't think these pieces are simple at all. They just use less notes than Bach.

Hussong: Regarding convincing DENON: Cage is much better known in Asia and Europe than in the States. My producer agreed right away to the "Dream" project. He even played the Conch-shell on one piece (his major instrument is usually the Saxophone).

TCFR: Have you studied any music written for the sheng or sho?

Hussong: Yes, I have studied the Japanese Sho for a while at the Tokyo Geijutsu Daigaku (Tokyo State University) with the Japanese Shoplayer Mayumi Miyata. The Sho or Sheng is the real ancestor of all free reed instruments and many pieces by contemporary Japanese and Korean composers refer to that "relationship."

TCFR: Which of your recordings has generated the most interest?

Hussong: "Piazzolla-Revolucionario" (I got the Echo classic prize for that last year), the Bach Goldberg variations/partitas and the Cage.

Hussong: I started to play the instrument at the age of four and began my studies in 1980. As for my career as a performing accordionist - well, my activities are divided between playing, teaching, working with composers, doing workshops, recording and recently filming. I don't think of myself just as a performing accordionist pursuing a career or so. It is too early and too "limited" to speak of that.

Hussong: I do teach regularly at the Würzburg university (Hochschule für Musik) 12 hours a week. Otherwise I do mastercourses in Salzburg, Florenz and Berlin once a year. In Germany, we have 12 universities where you can study the Accordion as a major. After graduation most students do teach at (municipal) music schools, or get jobs somehow connected with accordion orchestras (conducting and teaching). Some of them play in new music ensembles (there are about 20 professional new music ensembles in Germany), have their own small chamber music groups, do theater work or are members of Tango and Klezmer bands.

TCFR: When you perform in Europe and Asia, are you performing in small ensembles or solo? Do you have opportunities to perform with symphonies?

Hussong: Both, solo and chamber music. Very often with string players (Violin, Violincello). Once a year I try to premiere a concerto (with symphonies). Otherwise I am a free member of some new music ensembles (Ensemble modern, Musikfabrik etc.)

TCFR: You perform on a Hohner Gola free-bass instrument. How did you acquire your Gola? Do you think it's important that the accordion's resonance be increased on a scale like that of the violin which produces a lot more sound with a smaller, but more acoustically resonant sound box?

Hussong: I bought my Gola's in 1982 and 1997. They were built in 1967 and 1968 by Giovanni Gola himself. I also play sometimes on a Czech Delicia from Praha, especially when I play Renaissance and pre-Baroque music (see my Frescobaldi CD). I think the accordion's sound quality hasn't improved very much or rather hasn't improved at all since these instruments were built, due to a lack of interest on behalf of the factories as well as my sense that most accordion-players seem to be more attracted by systems (button, keyboard, bajan etc.) than by sound. In my opinion, it is not necessary to have more sound, but better sound!!!

TCFR: Have you ever played a bandoneon?

Hussong: No, the Bandoneon uses a completely different system which needs a hell a lot of practicing to play it really well.

TCFR: Since you play a piano accordion, are there any pieces that would be easier to play on the chromatic accordion? Can you please discuss the two keyboard styles and why the piano accordion became more accepted in Germany.

Hussong: No, not at all, do you have that impression? The two keyboard systems are a matter of historic development of the instrument. Up to now, none of them can claim to be better (even if some people like to defend one system against the other). It's much too early to discuss that. As I said before, caring about sound and good music for our instrument would be much healthier than getting taken away by ten buttons/keys more or less.

TCFR: I don't hear any stradella in your recordings. How often do you use stradella? 10% of the time or less? Why not use an all free-bass instrument?

Hussong: There are pieces using quite a lot of stradella but not in any known way (i.e. Lindberg-Jeux d'Anches and Berio-Sequenza XIII). I did use a lot of stradella in my "Tango-Fantasy" record. Why should I "abandon" stradella, when it's there and I can make use out of it once in a while. (Try to play 3 octaves on the Solo bass!!! I would rather push one button of Stradella instead).

TCFR: Do you play Zolotaryev and the Russian school? What do you think of this music?

TCFR: In America the accordion has, I believe, finally shrugged off its low-brow stereotyped image. This change in approval is partly due to Piazzolla of course, but also due to the popularity of Zydeco, Klezmer and other world music. Can you comment on the ascendancy of the accordion in America and the role of the accordion in other parts of the world.

Hussong: Oh, no, that's almost a whole book. Please ask somebody else.

TCFR: I enjoyed your recording with Tomoko Kato of Bach and Piazzolla.

TCFR: I was disappointed to find out that you did not obtain a U.S. release. So there is apparently still some additional work that we accordionists in the U.S. need to do to raise the musical conscience of our audience. How has this recording done in Europe? Can you provide ordering information?

Hussong: That recording has been released neither in Europe nor America due to a restructuring of the "overseas sales system of DENON." It should come out this or latest next month.

TCFR: You seem to plan your recordings very carefully. Do you regard them as a complete listening experience to be heard in one setting?

Hussong: I love doing records and try to always be very well prepared before each session. Recording is for me an art-form, where I can "materialize" my ideal inner imagination of a musical work. All of my records are indeed "planned" as a complete listening experience in one setting.

TCFR: Can you give us a hint what your next musical project might be?

Hussong: Last year I recorded in Japan a Double-CD (called "TWOGETHER") with my colleague Mie Miki on DENON. We played: Bach's C-major Concerto BWV 1061a; A. Soler's Concerto No. 6; Mozart's KV 594; Takemitsu's Cross talk (with tape); Tiensuu's "Aion" and Piazzolla's "Ballet Tango" (arranged for 2 accordions). The recording was a lot of fun and is going to be quite a special CD. We also did a one hour movie about that collaboration with German TV.

TCFR: Do you have any plans for another entirely modern recording like "Whose Song?"

TCFR: You seem to enjoy discovering new music and supporting new composers. Have you considered commissioning any composers or arrangers to write for the accordion?

Hussong: Up to date I have commissioned about 50 pieces. I try to premiere at least 5 pieces every year. I think that's essential for a young instrument like the accordion and fortunately most of my colleagues do that too. The next upcoming premieres will be solo and chamber music pieces by T. Suzuki (October 30 - Cologne), H. Lim (January, 2001 - Bremen), Concertos for accordion and orchestra by Toshio Hosokawa (December 5 - Paris), Adriana Hölszky (December 11 - Saarbrücken), Uros Rojko (Spring 2001 - Berlin).

TCFR: Do you look at unsolicited compositions for the accordion?

Hussong: Sure, I do look at and try out pieces which I didn't request.

TCFR: What country in your experience is strongest right now in producing young accordionists? And in which country do you receive the most favorable audiences?

Hussong: Finland and Germany are producing the strongest accordionists and Japan and Korea provide my best audiences.

TCFR: Who are some of your favorite accordionists?

Hussong: No comments on colleagues. But if you insist, the ones who are first Musicians and second Accordionists.

TCFR: What do you think the accordion needs to continue it musical elevation?

TCFR: Do you have any plans to tour in the U.S.?

Hussong: I was just touring the U.S. in February (2000) together with a cellist friend of mine, Julius Berger. We played Bach, Bloch, Gubajdulina, Hölszky, Soler, Frescobaldi and Piazzolla in Atlanta, New York, Oak Ridge and some other smaller towns.

TCFR: Our staff loves your artistry and thinks you're the finest accordion player ever! Other players are fabulous in their own way, but no one plays with more expressiveness and virtuosity! We thank you for sharing your talents with us!

TCFR: On behalf of our readers, my thanks to you for sharing your time and your thoughts. And the entire staff at The Classical Free-Reed, Inc. wish you much continued success in your musical career!

 Hussong: And Best Wishes to you too! Yours, Stefan Hussong.