This article was reprinted in its entirety from the November 1948 issue of Accordion World (New York). 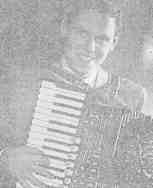 Before an audience of 3500 which filled the huge Chicago Civic Opera House, Mort Herold, accompanied by members of the Chicago Symphony Orchestra, played his way into the Accordion Hall of Fame. This was definitely one of the year's outstanding accordion events and Herold may be considered one of today's accordion greats.

Every since 1941, when he won the Chicago Tribune Accordion solo competition, Herold has displayed an abundance of Talent. This, coupled with long practice, has helped him develop his style, undoubtedly one of the best today.

The audience listened spellbound till the very last not as Herold, accompanied by the Symphony Orchestra, gave a masterful performance of Galla Rini's Concerto No. 1 in G Minor for Accordion and Orchestra, and brought out every last bit of beauty with the concerto.

A wildly applauding audience then brought Herold back for encore upon encore. For his first encore, he played "Hora Staccato" with the orchestra accompanying him. The tremendous applause after this brought more encores. When the curtain came down for the last time, the applause continued and stopped only reluctantly when it became obvious that the performance was over.

Herold displays such a profound master of the accordion that he makes the most difficult passages seem easy the mark of a real virtuoso! His stage presence is easy, assured yet modest. He affects no artificial mannerisms. He is a musician's musician!

Two more rhapsodies followed. They were Enesco's Roumanian Rhapsody No.1 in A Major and Gershwin's Rhapsody in Blue. The complete score were presented.

Herold then presented two of his own compositions entitled Two Eccentric Dances for Accordion. These were written for accordion in the modern idiom. The harmonies and progressions are unusual in the accordion literature, and could start a modern trend in accordion compositions. As the names imply, the dances are eccentric, featuring abrupt changes, angular melodies, and frequent usage of high and low registers. There is dissonance, but not too much of it.

The concert sponsored by the Chicago Accordion Center, of which Herold is a faculty member, marked the first time that an accordionist has played throughout an entire concert as a soloist, and then concluded it with symphony orchestra accompaniment.

The GallaRini Concerto was in three movements. It opened with a brief, dramatic introduction by the full orchestra. The accordion then entered, echoing the opening orchestral measures. The movement, ending in a brilliant close, followed the Sonata Allegro form.

The second movement was slow and filled with beautiful melodies. The final movement was in sixeight Saltarello rhythm in distinct Neapolitan style. The accordion demonstrated an interest in fugal treatment toward the end. The concerto ended in a long and triumphant unison.

The orchestra, led by Conductor Rudolph Reiners, gave Herold excellent support, playing with great precision and feeling. Mr. Reiners, who has been connected with the CSO for the past 22 years and is also a conductor of its String Ensemble, was impressed with the possibilities of the accordion as a full fledged concert instrument, and predicted to Accordion World that when the top composers composed enough compositions for the accordion, it would be fully accepted by the entire music world.

Accordion World incidentally predicted ten years ago (Feb. 1938 issue) that Herald, then aged 13, would become and accordion star of the future. A composition of his, "Puppet Dance" also appeared in the last issue.

At a banquet staged in Herold's honor by the Center, after the concert, out of town guests included Oakley Yale, Buffalo NY, president of the Accordion Teacher's Guild; his wife, Melba Yale; Mrs. Versa Trick of Toledo, Ohio, of the Trick School of Music there, John Gerstner, publisher of ACCORDION WORLD, New York City; Paul Miners of California, Herold's teacher for seven years, and Bill Sweitzer, recently of Florida.

Others attending included conductor Rudolph Reiners, Mr. And Mrs. Dave Biasco, and members of the Center's faculty, their families, and friends.

The Classical Free-Reed, Inc. staff gratefully acknowledges volunteer Benjamin Lang who assisted in the production of this article, as well as Stanley Darrow and the comprehensive American Accordion Musicological Society library.