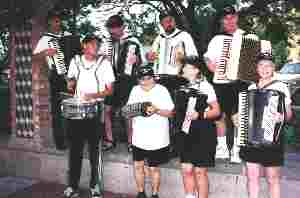 All accordion clubs talk about the future of accordion playing. After the popularity of the instrument in the 1940s and 1950s, the advent of rock and electric guitars somehow eclipsed the importance of the accordion as a "cool" instrument ever since. Lawrence Welk and Dick Contino made polkas and virtuoso pieces popular, but for the past half-century, the instrument has been assigned a secondary role in American culture and music-making. Accordionists have had to endure bad jokes and ribald ribbing by everyone who thought they knew something about music. Accordion clubs found the mean age of their members rose every year and it appeared the instrument was doomed to fade away.

Still, all accordion clubs talk about the future of accordion playing. The Accordion Club of Tucson (A.C.T.) is doing something about it. As part of our mission when we established the club in 1998, we included outreach to young people children in the elementary schools. We were determined to present the instrument as a viable one for youngsters, worthy of their attention as much as a clarinet, cello, or trumpet.

This fall, A.C.T. has been actively involved in the music education of children in the Tucson Unified School District. The club has visited 6 elementary schools and presented an Accordion Awareness Assembly for each. We have found students fascinated by the instrument, both in terms of its unique sound and its compelling technology. We have seen the joy in students' eyes when we begin to play. We have not had to endure bad jokes and smirks.

It is refreshing and comforting to know the students enjoy the instrument. Furthermore, most of them are aware that it is used by artists no less notable than Flaco Jimeniz, k.d. lang, Cheryl Crow, Eddie Vedder, Ric Sambora of Bon Jovi, Hootie and the Blowfish, and Phoebe Legere. The accordion is alive and vibrant.

What do we do at these assemblies? Five to ten club members participate each time and we play accordion music, of course. Assembly organizer, Dr. Stephen R. Yool, a geographer at The University of Arizona, arranged the program as a jet trip to Mexico, Europe and the Middle East, selecting songs from each country to play on the accordion, many on which the children are invited to sing along. We do German polkas, French chanson and Greek dances. We use Latin rhythms and end up with American folk songs. We include music of Raffi. We do singing games and echo clapping, demonstrating fundamental music concepts on the accordion. Club members, including an accountant, a music teacher, a mathematician, a music professor, a printer (4 Ph.D.s in all) take precious time off from work to meet at public schools and present an assembly. We have fun, we make music, and we present the accordion as a legitimate and viable instrument for making music. It's very rewarding.