What Constitutes a Classical Accordionist in America 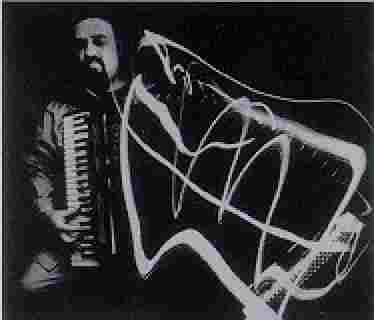 Walk into any GAP [a trendy clothing store] and you will see classic jeans, classic T-shirts, classic Kakais -- classics! It's a funny word today. It's overused -- all the more reason to constantly check it and re-define it.

I consider myself to be a classical accordionist simply because the more I study about the past the more I continue to learn. The more I learn, the more I have to teach to my students.

I also enjoy my American identity. Not nationalistic by any shape, but truly catholic and diverse in its tastes. We're noted worldwide for our "pop" culture and this includes the accordion.

I enjoy recalling the delight on Sofia Gubaidulina's face as I played my piano accordion with quint converter version of her De Profundis. I did it in gothic horror movie style. She loved it. She also took delight in the fact that it was the very accordion that backed up Tom Waits and other rock stars.

I consider myself a missionary as well as a mercenary. A missionary due to the fact that I have something wonderful to share. A mercenary because I get paid to do it. At present, I have no university affiliations except as a guest. I'm entirely freelance even my school The Institute for Private Studies operates entirely on its own -- no grants, no funding, etc.

As a missionary/mercenary, I'm sometimes paid to win someone else's war which I do because that's what I'm paid for. I sometimes have to put my own ideas on hold in order to do this well. I think this is part of the North American psyche -- a part of it.

In many cases I work for someone who's recent new work is an extension of something I single-handedly started many years ago. I watch them gather much more aplomb than I could have ever dreamed up for myself. The payoff for me is that I usually end up with a fresh new angle that I take with me as I go back to my own work. This is a way of improving my art.

A number of European artists have come to me for training and coaching. They come to get "loosened up." I also learn from their training and I use it to "tighten up" my students who need that extra polish. This is a way of learning from everything.

What's classical about all of this? It takes a lot of training to be a second or third banana. I think it's easier to be a first banana. It's a strange paradox. I've accepted a kind of limitation and in this limitation new frontiers open up to me all the time. And I have to be well-trained and ready to meet these challenges.

I like to think that my accordion work is about the accordion than around the accordion. It's not much about me anymore. My own compositions (realities) explore other works. My recent accordio-shinto work explores our American accordion ancestors such as Deiro, Frosini, Ettore, Contino, Palmer, Pino and yes, Lawrence Welk.

I've explored the tango as classical music. With the Tango Project, we ushered in a whole new era of neglected art such as tango, palm court, semi-classics and danceable modernism and post-modernism.

Leadership can sometimes take the form of a "back-seat driver" that functions much like Jiminy Cricket did for Pinnochio -- a conscience. In my messy/vital/American/democratic/diverse way, I work for the accordion and its continuing evolution. I stumble, I fall, I succeed, but I continue to learn.

Dr. William Schimmel earned his doctorate of Music from Julliard. A composer, author, lecturer, philosopher and virtuoso accordionist, he performs in a wide variety of styles from classical to pop and has appeared with many major symphony orchestr as and recorded with such noted performers as Sting and Tom Waits, who said, "Bill Schimmel doesn't play the accordion, he is an accordion."

An authority on Kurt Weill, Dr. Schimmel has recorded all of Weill's music with accordion. He is a prolific composer from the concert stage to Broadway theater and is founder of the renowned Tango Project. In 1992 he was named "Best Accordionist" by Keyboard Magazine and recognized as the figure who has done the most to elevate the accordion's otherwise tawdry image.