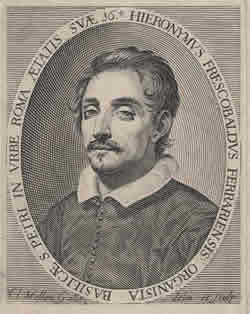 The Baroque Era spans the years 1600 to 1750. Girolamo Frescobaldi lived during the end of the Renaissance Era and the beginning of the Baroque. J. S. Bach's work is the culimination of the Baroque Era. Both men composed for and played the organ. Using the modern day portable organ—the free bass accordion—Riccardo Centazzo offers us his interpretation of these works from the masters of the past. It just may be, as the CD notes to the Toccate, Canzioni e Ricercare suggest, that the accordion is most suited to reproduce the delicate and nuanced Baroque sound. Certainly Centazzo's virtuoso playing does just that. He has graced us with selections from The Fiori Musicali and from the Second Book of Toccatas. These compositions present what are considered Frescobaldi's most important keyboard works. "Toccata" comes from the Italian "to touch". The toccata is an adroitly played piece best left to the virtuoso. "Canzona" derives from the word "song" and related to the English word "chant". The canzona was the precursor to the sonata and the fugue. The "ricercar" has a rather fluid definition. Literally is means "to search out" and the style is sometimes used to explore the key of the following piece of music. If you would like to "search out" the various meanings of "ricercar", I suggest that you go the Wikipedia entry for "ricercar". The Fiori musicali (1635) is a collection of organ works whose original setting was the Catholic Mass.

To enter the world of Frescobaldi is to enter a world where space is more important than time. Each of the compositions presented here have a wonderful sense of expansion. Meter is less important than the formation of the phrase. Cadences are elongated—producing a true sense of rest. Centazzo does a masterful job of entering this world. In an age such as ours where the pulse of life seems more determined by the machine than by the person, it is refreshing to hear music marked by a human pulse.

Johann Sebastian Bach was no stranger to the music of Girolamo Frescobaldi. In fact, among Bach's music collection was a copy of Frescobaldi's Fiori musicali.

Anna Magdalena was Bach's second wife. There are actually two notebooks that bear her name. One is dated 1722 and the other—1725. It is the 1725 notebook that is presented here. This work has a rather interesting history. Bach was both a compiler and a composer of this notebook. For example, the Minuet in G major (BWV Anh. 114) has been attributed to Christian Petzold and the Polonaise in G minor (BWV Anh. 123) has been attributed to Carl Philipp Emanuel Bach. (For further discussion of this Notebook, refer to Notebook for Anna Magdalena Bach). Wilhelm Friedemann was Bach's second child from his union with Maria Barbara Bach. He was the eldest son of the marriage. BWV 924 through 943 were written for this 10 year old son. Both the "Anna Magdalena" and the "Wilhelm Friedemann" books have a decidedly didactic purpose. Bach's 15 Inventions and 15 Symphonies have also been called two and three part inventions. These compositions are also didactic in purpose and demonstrate the master's skill at both teaching and composing. On the title page of these pieces, Bach wrote:

"A faithful Guide, whereby admirers of the harpsichord are shown a plain Method of learning not only to play clean in two Parts, but likewise in further Progress to manage three obbligato Parts well and correctly, and at the same time not merely how to get good Inventions, but also how to develop the same well; but above all, to obtain a cantabile Style of playing (emphasis added), and together with this to get a strong Foretaste of Composition." (from Wikipedia article: Inventions and Sinfonias)

"A cantible style"—what better instrument to reproduce a song-like style than the accordion (moreso than the harpsichord!). It has been said that Bach wrote music that seemed to exceed the capabilites of the instruments of his day. It would appear that these works are more suited to the accordion than to the harpsichord or clavier. In any event, Riccardo Centazzo has more than met the requirements of these works. His phrasing and control of the bellows (breathing) truly makes these pieces sing.