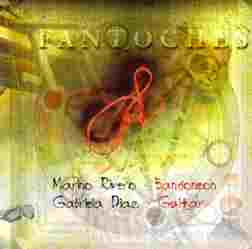 The somewhat fanciful cover art of Fantoches with its collage of wide-eyed puppets, kabalistic symbols and dream-like, fading layers of details is a good introduction to the aural revelations that follow on the CD. The recording is devoted to various suites and single compositions for the interesting combination of bandoneon and guitar: pure instrumental music by Uruguayan composer, René Marino Rivero. He appears here both as bandoneonist and composer and is accompanied by his associate, guitarist Gabriela Diaz.

Rivero is a noted master of the bandoneon, arguably one of the greatest living exponents of this large and difficult to play member of the concertina family. While quite capable of virtuoso pyrotechnics, he handles his instrument with nothing less than complete control here. These pieces require sensitivity and delicacy, and Rivero demonstrates his technical expertise in this area. There is much finely etched detail that would be lost without it. Likewise, his musical associate, Gabriela Diaz, would seem to be the perfect partner in interpreting his compositions. Besides having a solid command of traditional aspects of guitar technique, she also has the ability to coax interesting and unorthodox sonorities from her instrument both reliably and repetitively. They are so single-minded in their approach and interpretive abilities that, were these musicians capable of trading instruments, I would expect the same audible results.

It's surprising to hear this duo of only two instrumentalists producing so much sound when playing instruments capable of only moderate volume. I believe this is due to both the shifting musical texture of the compositions and the spatial quality of the recording. The bandoneon with its dark, throaty sonority and pairs of octave reeds creates a rich, three-dimensional sound, made even deeper by the reverberation of the studio in which this CD was recorded. The contrasting plucked strings of the guitar echo the same melodic motifs played on the bandoneon, but being texturally different, they seem to come from a higher level. The combination is incredibly complementary, and the overall sound seems larger than the sum of its component parts.

It should be no surprise that Marino Rivero's music has a decided Latin American accent. A native of Uruguay, he grew up playing the bandoneon; the waltz-like ranchera, the syncopated milonga and candombe (not to mention the dark and passionate tango) are all a part of his musical training and repertoire. These elements all make their appearance in his chamber music suites. In his hands they are no longer dances in the traditional sense, but it is their spirit that informs his compositions.

Truly listening to this music demands one's attention, yet once it takes hold of one's consciousness, it is reminiscent of sitting on a train and abstractedly gazing upon the hypnotically passing scenery. There is a fragile, dream-like quality to the compositions. Snatches of rhythm float by, a mournful yet tantalizing cadence makes an appearance, and motifs rise from subliminal depths only to sink below the surface again. However, what at first sounds amorphous is actually highly structured. Rivero employs compositional techniques that range the gamut from chordal to contrapuntal. It is no surprise that he admires and plays the music of J. S. Bach on the bandoneon. In fact, in the title composition Fantoches he seems to be playing with Bach's own compositional signature the notes B flat, A, C, B (or B A C H in the German notational system).

There is only one feature of this CD that bothers me. There is no true index of pieces by track number. All are listed, but not in order. They are scattered about the trifold brochure in an abstract fashion. While this may be very catchy and in keeping with the overall tone of the cover art, it's necessary to tally up the movements to determine which piece corresponds to the digital readout of one's CD player!

If I might voice a wish, it would be that this disk reach a wide audience. I believe that René Marino Rivero, bandoneonist and composer, deserves to be heard. His is a unique voice in contemporary music. While it is true that his free-reed instrument happens to be my personal favorite, that is not the only reason I would champion him. There have been too few South American voices heard in Europe and North America. This, I believe, is disproportionate to the amount of talent to be found there. For me, Rivero's compositions have preserved the unique sensual qualities of Uruguayan music. The longer one looks into the mirrored surface of this compact disk, the more magic one hears.