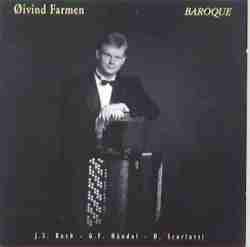 A CD Review by Dr. Paul A. Magistretti

Øivind Farmen trekked along the concert trail with Jürgen Sundqvist this year. If you saw the duo perform you saw a great show and one that exhibited two consummate artists displaying the epitome of two major traditions: the European tradition per Mogens Ellegaard and the American tradition by the grace of Anthony Galla Rini. It was wonderful to witness.

Of the two performers we were less familiar with Øivind in America and he was a revelation. Where has this man been? Fortunately, he left behind discriminating evidence that lets everyone hear that he is a major talent — a CD produced in 1995. The recording is a selection of baroque music played so well that even listeners who are usually unenthusiastic about the baroque genre will be delighted. On the simplest level he has a great instrument that was beautifully recorded — the reproduction is clean, sweet and delivers lots of presence with none of the psycho reverb that usually turns accordion music into a horror movie soundtrack. While the selections were originally written for the harpsichord, Øivind's careful attention to tonality (switches), superb articulation and bellows control transfers them beautifully to his concert accordion (Zero Sette's B 32 C; 64 notes treble, 58 notes bass, plus a Stradella system with the last two rows of the bass keys stepped to allow the use of the thumb).

His first act is ironically a showstopper, he plays the Aria and nine variations from Bach's Goldberg Variations (excerpted from thirty) giving the listener a good sense of the whole. Glenn Gould made this work his debut recording in 1955 and astounded the world by bringing the sheer beauty of it to our attention. Until then, musicians had relegated the Variations (along with most of Bach's keyboard works) to a Never Never Land of finger exercise. Not so. The Goldberg is three-dimensional emotion when performed as it is here — like De Niro says in Goodfellas, "You'll hear things." The variations are built on the harmonic structure of the opening Aria and work like baroque jazz; say, Art Van Damme plays Lady Be Good and improvises choruses — well, Bach gave us thirty choruses on the Goldberg Aria, which is just a hint of his genius, for according to some he improvised greater compositions than he ever wrote down. Øivind performs with clarity, intelligence and sensitivity. Above all, he understands what the music is about and includes us beautifully in his understanding, giving us playing that's simple, deep and unaffected.

Domenico Scarlatti of the famous peripatetic family of Sicilian maestri spent the latter part of his life in Spain. While there he primarily composed sonatas for the harpsichord (over 500) and they're miniature masterpieces: inventive, charming, dramatic and beautiful — plus, they were without precedence in musical history. They've since become a part of every keyboard performer's repertoire from Mozart to Horowitz. Øivind selects four and plays them with musical insight and feeling. Many virtuosi I've heard fail badly with Scarlatti, perhaps misled by the maestro's terminology in calling them esercizi, or giving in to urges to corrupt them. Certainly, the pieces can be brilliant and flashy, but they are just as likely to be deceptively deep. Seeing Horowitz perform the B Minor Sonata on his return to Moscow was a transcendent experience and indicative of what can lay beneath the surface. Øivind's choices are solid and he meets them on their own terms brilliantly. I prefer his interpretations to almost anyone's, because of his integrity and the sensitive rendering of them as expressive accordion performances. He's not being a pseudo organist or injecting ill-informed ego into these miniatures; he's being an inspired player who understands the music, as well as the strengths and weaknesses of the instrument he's playing (loving the accordion for what it is), and makes a superb artistic statement.

Händel's keyboard works are often overlooked — his Chaconne in G Major consists of a short theme and twenty-one variations. It's not comparable to Bach's Goldberg Variations, but it's good to hear this side of Händel, for our Händelian experience shouldn't be just be just one big Hallelujah all the time. Øivind makes the Chaconne sound like 21 lively riffs that transcend time. The Suite in G Minor (a typical baroque suite) is even better. It anomalously has only three movements (allemande, courante, gigue), the sarabande is missing, but the three we have really sing and dance in Øivind's performances. Especially nice is the melodious courante and the vibrant gigue.

Øivind has given us an interesting program and played it beautifully. Choosing an all-baroque program and sticking to it shows artistic integrity. Accordionists often offer disparate anthologies and consequently come across sounding like they're auditioning the instrument and themselves rather than reaching for the heart. Øivind offers solid insight into these works, has something to say and expresses himself and the music with artistry and feeling. He delivers performances both razor sharp and expansive, capturing the emotion and meaning of the pieces beautifully. Few accordionists attempt this kind of artistry, let alone achieve it — most settle for dancing fingers.

Lastly, Øivind plays the accordion as an accordion, not as a wannabe Wurlitzer, or wouldabe Steinway; he allows the instrument to have it's own expressive voice and this recording has some of the best and purest accordion sound I've heard.