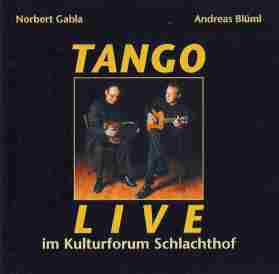 Label: Privately produced by the artists


Review by Gregory A. Vozar

Anyone who has watched Argentine tango dancers in action is familiar with their tense, intricate legwork and their steely, resolute gaze. Considering the degree of concentration required to bring the artful and improvisatory tango to life on the dance floor, this should come as no surprise. However, I have seldom seen tango musicians look quite as severe as dancers, yet bandoneonist Norbert Gabla and guitarist Andreas Blüml definitely show their serious side on the back cover of their album Tango Live. I found myself wondering if such frosty exteriors could hide the passionate heart of a tanguero?

Happily, not do their hearts beat in the proper rhythm, but their compact disc gives proof to the adage, 'opposites attract.' The cool, Teutonic heritage of Gabla and Blüml might seem poles apart from the passionate Latin warmth of tango from South America; nevertheless, this pair of musicians does justice to their adopted musical idiom. There is nothing aloof or remote in their readings of tango classics like Prepárense, Milonga de mis amores or that hallowed bit of Gardeliana, Volver. After all, tango is the century-old musical progeny of a heterogeneous flood of immigrants to the Rio de La Plata region, many of them Middle Europeans whose Germanic surnames are common in Argentina and Uruguay today. How appropriate then that the instrument most closely identified with tango is the bandoneon, a German concertina.

I was eager to hear this recording because the instrument Norbert Gabla plays is not a venerable antique but a contemporary bandoneon by Dutch builder Harry Geuns. The plaintive Alfred Arnold sound has long been synonymous with tango and is now a part of Argentine mythology. So much so, that many players refuse to admit the viability of new instruments. However, such passionate loyalty to history may not endure forever because the pool of remaining AA instruments in playable condition shrinks with every passing year. To the credit of Geuns, his bandoneon sounds true to historical prototypes, having a character neither more aggressive nor timid than its elder cousins. It is quite capable of rendering all manner of traditional tango ornaments and effects, from familiar marcato chords to the rapid fingering of Nocturna and the exceptionally sensitive bellows shake of Piazzolla's Oblivión.

The angled keyboards of Norbert Gabla's bandoneon are unique; Gabla himself designed them and Harry Geuns realized the mechanics. The layout is similar to the flowing diagonal notes of a three-row, C-griff chromatic accordion. There is an additional row of buttons allowing the artist to form extremely wide chords, similar to those playable on traditional bandoneons. This instrument is also unisonoric; i.e., each button plays the same note in both bellows directions. However, unlike the Peguri or other unisonoric bandoneon systems, the Gabla keyboards mirror each other, making hand-movements identical between left and right manuals. There are pictures and diagrams on the "Hybrids" page of Harry's website: http://www.bandoneon-maker.com/

Even the finest instruments are only tools, and without well-conceived music and the talent of an expert musician, they might as well be mute. Fortunately, both Gabla and Blüml prove to be anything but voiceless. The versatile bandoneonist is also a composer, and four of his works appear here. Of them, the cool Kein Hunger with its Uruguayan accent and improvisatory guitar work by Blüml is both stylish and danceable. The wistful and expressive ballad, Dreieck, more a bolero than a tango, was very well received by the live audience at the Kulturforum Schlachthof where this album was recorded. In spite of his sound musical instincts, there are a few problems with the bandoneonist's grace notes and short improvisations; they are occasionally atypical of tango. This is most noticeable in Mano a mano and Descubriendo la ribera. At times, they seem rhythmically awkward and do not flow naturally or seem part of the musical line. This makes for a few clumsy moments in the generally fine music.

Overall, I found the music on this recording enjoyable and the Gabla-Geuns bandoneon both innovative and intriguing. The artists give ample evidence that musicians from outside Argentina and Uruguay can become interpreters of porteñomusic without resorting to memorized plagiarisms or clichés. Being a confirmed tango lover, it makes me happy to find passionate music and dance alive and well in many corners of world.