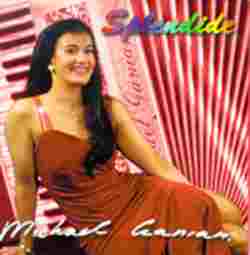 All compositions by Michael Ganian.

All compositions by Michael Ganian.

Before placing this disc in my CD player, I noted the fine cover and graphics. When the disc insert is unfolded, one side of it is actually a large poster of Mr. Ganian and a lady friend to place on your wall. Whenever I get a new recording containing unfamiliar music, it always drives me crazy trying to figure out what the names of the tunes mean in my native language. Thankfully, the artist did something here I always wish for; he gave the titles of each track and ordering information for the recording in English, Italian, Czech, German and French.

I first played this CD on an inexpensive portable player and was greeted with a loud screeching from the first track! Hmm... perhaps it was a multi-media track to be played on a computer! I advanced to the second track and was greeted with some very pretty music, but I remained curious about what was hidden on that first track. I then placed the disc in my computer's CD-ROM drive; lo and behold, I saw a multi-media presentation to go along with two of the numbers on the CD. While this was an interesting feature, I found it more of a curiosity than something worth repeated visits. Nevertheless, all this gives indication of a first class job in preparing the CD. Unfortunately, the liner notes make no mention of this computer multi-media option, so those unfamiliar with such things might think the disc unplayable! In any case, a computer is not necessary to listen to the musical portion of the recording, this you may enjoy on a standard player.

After the video clips of Mr. Ganian and a lady friend, (he wrote in the liner/poster notes: "I would like to dedicate this magnificent music to women with undying passion in their hearts, to woman [sic] who believe in dreams and a life full of magic."), I played the CD on my large home audio system and turned up the volume. This would be the best way to test the recorded sound. I was not left unimpressed! This certainly ranks among the best recordings I have heard in the accordion category. Very nice microphone placement, a very sweet sounding instrument, and a fine orchestral or synthesizer accompaniment all make for a good sound.

The style of music is hard to place. While all the tunes are reminiscent of French musettes, they tend to take the French sound into new territory. Perhaps this is closest to what is known here in the United States as "Smooth Jazz" or "Alternative Music." I thought the compositions were very easy to listen to, very fine, particularly those with lush orchestral accompaniment. However, there were a few selections that had a clock-like "walking" bass line that detracted from the melody. A good example of this is the track Verruccio, the string bass player comes through as strident.

The most outstanding tracks on this compact disc include Carduelis De Musette, accompanied nicely by a synthesizer, and my personal favorites, Eve andReine Des Villes, which were accompanied by orchestras. While the previously mentioned walking bass was obtrusive on some of the tracks, it actually worked very well on Le Chardonneret with its bright, uplifting theme.

In summary, I do like this CD, even though I have a hard time categorizing it into a traditional stylistic niche. If you enjoy easy listening music by a talented composer with the playing skills to back it up, this would be a great CD to add to your collection.

This CD, the Paris, was the second Ganian CD I received. After listening to the first CD, Splendide, I was expecting something special but was a little put off by the limited recorded material on the Paris. There is only a total of 24 minutes and 47 seconds. To make matters worse it appears that three of the tunes are repeats from the Splendide CD, Goldfinch, Morava Girl and Verucchio. I am not sure why he chose to re-release the same material. *

But in any case the recording is of excellent quality and continues the French influence in his compositions which tend towards the smooth jazz or alternative music end. Unlike his Splendide CD there are no multi-media tracks.

The one standout on this CD is his Nightingale which utilizes the sounds of a bird to influence his composition in a most unique way. But that one tune does not make make me want to rush out and buy the whole CD. So in summary while there are a couple of neat new tunes here, the short length of the CD and the repeated performances of some material would tend to make me move down the list of available CDs for something else.

It seems to me that the second album reviewed -- the Paris -- was released before Splendide. On the Paris there is no year of release anywhere mentioned (or name of a record label for that matter) and the total length is short; which implies to me that it was self-produced by Ganian, perhaps to test the market for his music.