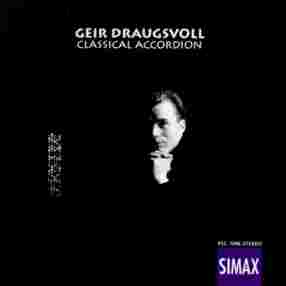 Seconds after inserting Classical Accordion into my CD player, my ears were greeted by a voluntary of familiar and startlingly imitative clarinet-like notes; I quickly grabbed the CD booklet, sure that this fanfare could only be the harbinger of some very exciting music-making; nor was I disappointed! Nothing less than top drawer musicianship and technical ability pervade every piece recorded here by Norwegian accordionist, Geir Draugsvoll. While only 30 years old, he seems to have already acquired a degree of interpretative maturity and musical experience that belies his age. While I am personally more at home in music of earlier times, this young man has nearly made a convert of me!

The suite of dances from Stravinsky's Petrouchka (from which came the above fanfare) was arranged and performed by Draugsvoll and his associate James Crabb. This is truly an uncanny piece of artistry. I've heard duo pianists, duo harpsichordists, duo organists, actually, any number of instrumental duos, but never a pair whose playing seemed so seamless and perfectly integrated! They play as if one mind guided four hands and two accordions. Only the constantly changing tessitura and the depth of sound betray the fact that there actually are two artists performing!

When I first saw this piece listed on the album, I feared it would suffer in transcription. Fortunately, this is not the case. While it isn't always possible to imitate Stravinsky's rich orchestral textures, free-reed tone can resemble both woodwinds and strings; these qualities are so excellently managed here that there is no lack where texture or color is concerned. True, two accordions may not be able to render crashing fortissimos, but recognizing the dynamic limitation of their instruments, the artists have carefully calculated their resources and produced in-scale results.

The concert accordion repertory has been dominated for some time by Scandinavian composers, and this album samples their work. The Sonata, opus 143A by Danish composer, Vagn Holmboe, is the first such offering and is as much absolute music as any sonata from the Baroque or Classical periods. Intellectually constructed along neoclassical lines, it consists of four movements designated by tempo. It opens with a sinuous Allegro followed by an introspective and shadowy Adagio, ma non troppo. The urgent and flighty Presto leads to a satisfying final Allegro, a fugue in a not-too-strict form.

Other Scandinavian compositions recorded here are the playful yet sinister Skogsväsen or Wood Spirit by Staffan Mossenmark, Arne Nordheim's piece-of-contrasts Flashing and Tears by Bent Lorentzen, a composition in which the accordionist/interpreter is given the interesting task of deciding which emotions will evoke tears in the listener.

Svend Aaquist's Saga Night was for me it was one of the highlights of the album. Commissioned by and dedicated to Geir Draugsvoll, it is a singing, linear composition filled with interesting dynamic shading and sometimes poetic, sometimes powerful counterpoint. The piece opens in a persistent yet unhurried tempo, almost as if it wished to loiter on the keys, peppered with szforandi and built upon interlocking rhythmic motifs. This scheme might easily become ponderous or studied, but it never loses its aura of visionary mystery in Draugsvoll's hands. There are tonal centers as well as consonance and dissonance to this music, but they weave in and out of the rhythmic fabric, creating shifting and changing hues. The CD's program notes refer to the "dreamtime logic" of the music, and the seemingly disparate elements of logic and dreams do indeed flow into a remarkable compositional whole.

Japanese composer Yuji Takahashi's Like a Water-Buffalo is another provocative piece and the only inclusion by an Asian composer. It is restless and insistent with its small snatches of plaintive melody and repeated fragmentary motifs interrupted occasionally by jagged shards of notes. In spite of its sometimes catchy rhythms, melancholy is the theme here. The album notes tell us that the water-buffalo is a symbol of abject poverty and misery in Japanese mythology. As with nearly all the pieces on this album, the phrasing and articulation are impeccable here.

While nearly totally dedicated to 20th century works, Classical Accordion does not forsake traditional harmony. The disk ends with a composition by W. A. Mozart, an Andante originally written for a clockwork or "barrel" organ. This is a perfect encore piece for concert accordion and brings the entire album to a close in a satisfying way. To the performer's credit, his playing here is cleaner than almost any other version I have heard. His trills begin properly on the upper note, giving them the bite that Mozart intended. Somewhat less stylish are his tiny end-of-phrase ritards or hesitations, and slightly less use of arching dynamics to delineate already well-articulated phrases would make the whole sound slightly less fussy.

The aural quality of the this CD is superb, and the notes, in both Norwegian and English are descriptive and lend insight into the compositions. The engineers have captured the tonal colors of the Pigini Mythos instrument(s) used in this recording to perfection and at all volume levels. This is a remarkably responsive accordion; even the lowest reeds come to life instantly at the slightest breath of air. To sum up my impressions, Classical Accordion is a fortuitous fusion of talented artist, technical mastery and excellent instrument; this combination certainly evokes some musical magic on this recording.