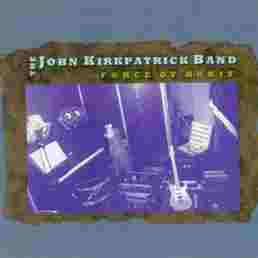 Kirkpatrick's musette accordion, accompanied by tuba, mandolin and drums, provided a nice French flavor in "Menage a Trois." On the other hand, "Blue Balloon" provided a nice contrast with it's rock 'n roll beat and twelve bar blues progression. "The Gas Almost Works" is a rhythmic rocking piece in 5/4 time which features accordion solos between unison electric guitar, bass and drums.

Although I don't think Kirkpatrick is a great singer, he has, none-the-less, a good stage personality and I enjoyed listening to the several songs which he sang.

His sense of humor deserves special mention; one moment in particular made me laugh, and laugh, and laugh some more -- out loud of course. Why? After track two, he announced: "I shouldn't really tell you this, but we're recording the show tonight for a possible record, so could you please practise clapping a bit louder than that for the control room? OK? Go!! (loud audience applause and cheers) Thanks! We'll just put that on between each number!"

There was no need to use that laugh track in the final edit, since the audience appreciation was sincere and voluminous after each song. I also enjoyed Dave Berry's tuba playing. It added a wonderful depth; especially when he played melodies in unison with the recorder -- some three or four octaves apart!

Kirkpatrick's album captures the spontaneity and verve of a live performance. It's a real toe-tapper.