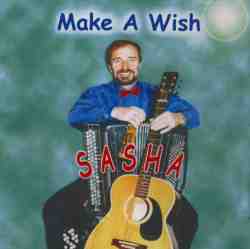 Alex Yaskin (a.k.a. Sasha by his fans) was born in the Western part of the former Soviet Union (Belarus) in 1953. He has music degrees from Tchaikovsky Music School and Socolovsky Music College as well as a Bachelor of Arts in Music. He has performed with the Smolensk State Philarmony.

Alex immigrated to the United States in 1994 where he decided to become a professional accordionist in San Francisco. He plays many instruments besides his favorite instrument, the bayan (Russian chromatic accordion). These include Guitar, Piano, various keyboards, balalaika and perhaps his most unusual instrument....the Accordion Case Drum!

While he has the technical virtuousity to dazzle his audience with his fine playing of the classics and Russian folk music, he decided early on that he wanted to be known for an extremely wide spectrum of musical repertoire. This would increase the potential base of his audience and this tactic has worked out exactly as planned. As Alex demonstrates on this CD, he indeed is at home with virtually any type of music. Alex likes to play music that isn't "normally" heard on accordion. One moment he will be playing a complicated arrangement of a Bach organ work, or a Mozart concerto...then he switches to a tune by Elvis Presley, followed by that hilarious "Chicken Dance." Next he might put on his cowboy hat as he switches to a Country Western tune or two....then back to the classics with Swan Lake. His repertoire includes the classics, Russian Folk Music, pop tunes, Japanese, Chinese, Turkish, Jewish, Latin, Disco, Movie and TV themes....you name it he can play it. This broad spectrum of musical styles could be troublesome to the listener. On this CD, just as in his tremendously popular live performances, he draws the audience in and impresses with his smooth transitions. The whole concept works great!

In the same vein he likes to be unconventional in his music arrangements. Through the magic of multitrack recording utilized on this CD he plays several instruments and sings in the "one man band" tradition. If you listen carefully you will note the sound of a drum. Actually it isn't a drum... Alex figured out a way he can provide his own "drum set." He sits on his accordion case and while playing, uses the heel of his shoe to thump on the case mimicking a drum. In live performances this has proven to be most effective and a real crowd pleaser.

In the short time since he arrived here he has become a VERY popular performer in the San Francisco Bay Area. Besides playing regularly at several restaurants he also was a featured performer at the 1999 Cotati Accordion Festival where his playing and warm stage banter kept everyone on the edges of their seat trying to figure out what he would do next.

This is a fun CD and deserves a spot in your collection. But you will have a dilemma...."Hhhhmmmmm.....what category shall I file THIS one under?!"