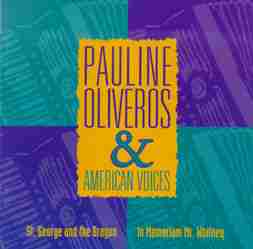 Listening to a recording of Pauline Oliveros is less like listening to music than attaining an altered state of consciousness. If you don't attain this state, the music can be heard as very monochromatic and dull - there is little in the way of structured drama here. Used correctly as a tool for altering reality and the music can serve as a transformational pivot. I actually react both ways, it all depends on what else is going on in my life at the moment. It's certainly better than most "space music" or "new age" recordings out there which tend to dwell on bland consonance.

First a little needs to be said about Pauline's accordion. It's a free bass Titano tuned in just intonation. Its home key is C which means all scale notes within C are in tune with perfect acoustics. The more sharps and flats that are added however and many odd micro intervals are introduced. The two pieces on this album serve as examples. In Memoriam... is firmly within the C based harmony though the choir provides some excursions from that center. St. George... starts within the micro intervals, producing some wild dissonances and "beats."

Oliveros has done many collaborations and In Memoriam... is one of those. The group she worked with here is American Voices, a choir founded and directed in 1978 by Neely Buce to promote and perform new American music. Much of an Oliveros collaboration involves "deep listening" sessions as well as a special acoustic environment. "Deep listening," might be regarded as an improvised musical meditation. Like John Cage, Oliveros regards all sound as music and the acoustics of the room become an environmental instrument. She often speaks of playing the room. In this case the room is a chapel at the Pomfret School in Connecticut. It's a stone walled, rough, echoing place that certainly colors the vocal work.

Oliveros apparently doesn't write scores as such but rather text instructions that allow for a lot of improvised action from the participants. Because much improvised music strikes me as either lost searching or re-arrangements of familiar riffs, I'm not especially drawn to it. But again, if one regards Oliveros' work not as finished music but as a record of a meditation process, then it really had to be improvised. It's also fair to say that probably the most meaningful experience was felt by the participants more than the listener. In Memoriam Mr. Whitney gets its title from the passing away of a friend's father though it's really an open ended memorial to all loved ones lost. During the course of the music, the performers speak and chant the names of people they've known who have died. The harmonies hover in fifths and octaves, droning often on C. The choir alternates between short callings of names (in a widely varying manner and attitude) and long sustained tones complementing the accordion's harmony. Because the performers are moving around, this is a good headphone piece.

St. George and the Dragon for solo accordion is more dramatic harmonically and inspired by the spiritual battle of the medieval rescue story. As earlier stated the tuning of Oliveros' accordion makes for some unusual overtones when keys foreign to C are explored. The piece begins with a slow climactic arc as more intense dissonances are introduced with greater volume. There follows an extended period of dissipation. It's in this section that some amazing beat patterns emerge. Ultimately the intensity again builds but very briefly and an unresolved soft cluster chord concludes. This is one very long (47 minute) piece however and Oliveros' constant wash of unbroken drone may annoy listeners who don't enter the trance.