The Great Regondi, Volume I 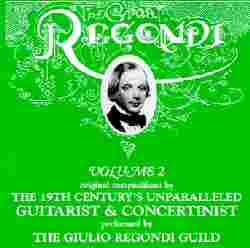 "The concertina was, from the earliest years, considered a concert instrument, while the accordion was considered a folk instrument. Toni Charuhas, the author of The Accordion, wrote, "The first accordion, like most new inventions, was clumsy, heavy and rather ugly in sound. . . . The concertina rapidly became a complete concert instrument with many concerti being written for it and numerous virtuosi appearing to perform them. In pathetic contrast, the accordion made very little progress . . . until the beginning of the 20th century."

"In England, the concertina became accepted as a concert instrument, largely due to the efforts of the great concertina virtuoso and composer, Giulio Regondi (1822-1872). He was a child prodigy on the guitar and by the time he was eight years old had performed for most of the courts of Europe. At the age of nine, Regondi started learning the concertina and, after four years of study, began performing it in public, creating a sensation. He shared the stage with such renowned performers as Mendelssohn, Clara Schumann, Thalberg and Moscheles. During the height of his fame he was commissioning and performing new soli and concerti (six in all) by well-known composers.

"After several decades of "the golden age" of the concertina, the tastes of society began to change and the instrument gradually became unfashionable to classical audiences, in no small part due to the scorn inflicted upon it by influential critics such as Henry Chorley and Hector Berlioz. Although Regondi's virtuosity and abilities had not diminished, public opinion had, and so he retired at the end of 1869. He died of cancer two-and-a-half years later. His music was quickly forgotten, not to be re-discovered for over one hundred years."

(Excerpt from The Classical Squeezebox by Henry Doktorski)

It was with great pleasure that I listened to the two volumes of The Great Regondi; to my knowledge the very first recording of early Romantic music for the concertina.

Concertinist Douglas Rogers has accomplished pathbreaking research on and performance of the nineteenth century concertina repertoire and has lectured and performed in Europe, North America and the Middle East. He has written a series of biographical articles about Giulio Regondi published in The Guitar Review and in The Royal Academy of Music Magazine. His recent performance of Molique's Concerto No. 1 was probably the first in this century.

The repertoire on the CDs is varied, including solo guitar pieces, songs for voice and piano, a solo concertina piece and pieces for concertina and piano. The entire CD is simply a delight to listen to: Regondi's music provides us with a fascinating glimpse into the the mid-nineteenth century concertina craze; a phase in Western musical history (like the rise and fall of the harpsichord -- and its subsequent resurgence in popularity early in this century) which I sincerely hope is coming back into style.

The CD booklet notes are informative. I congratulate The Giulio Regondi Guild and Bridge Records for their significant contribution to our musical culture.