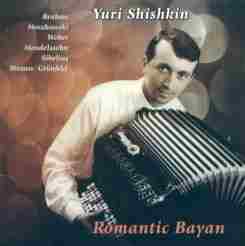 Transcribed for bayan (button accordion) by:

This dance is said to have been inspired by the composer's visit to a Viennese restaurant where he heard several Hungarian violinists and felt compelled to interpret their skills and passion in a series of dances. The artist displays consummate technique in this selection in the virtuoso variations, particularly in the opening and final sections. More importantly, his musicianship permeates every phrase with marvelous contrasts in dynamic levels and tempi, especially in the middle minor section.

Spanish motives dominate this composition, which is rhythmically rich and complex. The opening section is bombastic and energetic, giving way to a second section which is softer and spiced with sensitive attention to rubato. Shishkin is adept at playing the polyphonic sections so that contrasting melodies are clearly delineated, with minute attention to the turn of phrase in each. He is a sensitive musician and knows when to give as well as to pull back so that the interpretation is never overwhelming,. His use of bellow shakes is noteworthy, again enhancing the overall musical interpretation, rather than displaying his awesome technique for effect alone.

This playful piece is also Spanish-based, typical of salon music of the second half of the 19th Century. Although a rather unmemorable composition in total, the performer is adept at milking the technical demands, which are high, into a satisfying musical interpretation, particularly in the upper registers. This piece is simply fun without attempting to be profound.

A chordal introduction is reminiscent of a church organ or harmonium. The balance between left-hand and right-hand counter melodies is sensitively accomplished by Shishkin in this slow tempo. His attention to musical dynamics in shaping phrases demonstrates his continued command of musical demands without sacrificing any of the technique required. This entire work, which is programmatic, was composed by Weber for piano and orchestra in 1821. In this opening movement, the wife of a crusader stands on the parapet of a castle gazing into the horizon, wondering if her spouse will ever return.

In this spirited movement, the wife imagines a battlefield on which she sees her husband badly wounded and dying. Suspense is built by sharp dynamic contrasts and effective use of crescendi by the performer. The movement dies away in pianissimo.

A slow opening is followed by a grand march as the wife sees her husband return with a group of victorious knights. The gradual crescendo which commences the march is handled with excellent musicianship by Shishkin, building in dynamics without ever speeding up. (How nice to hear musicians who can separate growing louder from becoming faster!) The timbres are full and resonant in this selection, much like the famous march of the Appian Way in Respighi's The Pines of Rome.

This concluding movement is a tour de force of technical delight, interpreted admirably by the performer. The tempo itself is virtuoso, but Shishkin maintains control throughout. In the program, which was penned by one of Weber's students, not the composer himself, the wife rushes to greet her returning husband and happiness reigns. This movement has the flavor of perpetual motion (her run is obviously a long distance), but the performer never overwhelms.

This sprightly composition has a clearly delineated upper melody with lower accompaniment which Shishkin voices with fine sensitivity. His ability to mix sounds and point out musical nuances is excellent and there is great attention to detail. Short and to the point, this is an extremely satisfying cut. 9. Spinning-wheel Song (Mendelssohn) 1:39

This is again a movement perpetuale selection, relentless in tempo, but phrased with the great sensitivity which the performer has demonstrated throughout this CD. 10. Valse triste (Sibelius) 5:22

The opening of this selection is lugubrious and ominous, which is not surprising. Valse triste comes from the incidental music to A. Jarnefelt's drama Kuolema, which means "death". A second section is suggestive of a dance macabre, lighter than the opening section but still ominous. Shishkin is adept in using dynamics to let this section grow without becoming distorted or unmusical. The recapitulation revisits the opening and breaks into a more spirited waltz. Shishkin's playing is clean and musical, a true delight to hear. 11. Soirees de Vienne (Strauss/Grunfeld) 6:51

This is Viennese street music, full of charm and energy. The performer's sensitivity through the rubato is enjoyable as his ability to contrast left-hand and right-hand melodies. This selection is reminiscent of grand times past, full of nostalgia and elegance.

Yuri Shishkin was born in 1963 in Azov, Russia, and graduated from the Gnesins' Russian Academy of Music in Moscow in 1992. He proves himself to be an admirable bayan performer in this CD, fully in command of both technique and musicianship for whatever the music demands. He is consistently clean in his execution of the most intricate passages, but there is continued attention to musical details in how he shapes a phrase or voices the left/right hands. I found this a highly enjoyable CD. Romanticism is wonderfully "musical" music and the performer continually demonstrates this Principle.

Wow! Shishkin is amazing! I cannot praise this CD highly enough! This CD definitely rates up in the top ten of the 300 or so accordion CDs I've heard. What a virtuoso performer! What power! What grace! What sensitivity! And his instrument! A masterpiece. It almost makes me want to throw away my piano-accordion as obsolete! What range! What a span amongst each hand! What deep bass tones. What bright highs! And the balance is perfect.

Although it sounds like the engineer boosted the bass EQ to emphasize the low end, it doesn't disturb me, as the inhancement seems tastefully moderate. Sometimes on other CDs the left-hand manual sounds like an organ, with so much EQ distortion, but thankfully that is not the case with this CD.