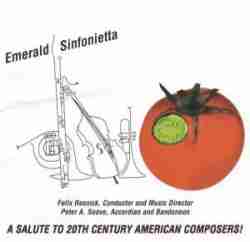 To date, The Classical Free-Reed, Inc. has received some 250 CDs which have been reviewed in the pages of The Free-Reed Review. Among hundreds, only a handful of CDs included works for accordion and orchestra, such as:

There are embarrassingly few recordings of compositions by American composers -- perhaps due to the widespread prejudice against the instrument in the United States by classical music lovers. However, there are a few fine recordings: Diane Schmidt performing Alan Hovhaness' Rubaiyat with the Seattle Symphony and Robert Davine performing Carmelo Pino's Concertino with the Lamont Chamber Players. (I cannot include in the list my own recording of George Gershwin's Rhapsody In Blue with the Duquesne Chamber Players as it is a transcription, not an original work.)

Granted, the repertoire is limited, but there are a few excellent works. Roy Harris wrote Theme and Variations for accordion and orchestra, Henry Cowell wrote Concerto Brevis for Accordion and Orchestra , Paul Pisk wrote Adagio and Rondo Concertante for two accordions and orchestra. Paul Creston and Alan Hovhaness wrote concertos, Anthony Galla-Rini wrote two concertos and Pietro Deiro wrote three. I believe these compositions have merit and deserve to be recorded.

Ah . . . But it is not so simple. Producing a CD is expensive, and hiring an orchestra can cost tens to hundreds of thousands of dollars. Certainly the cost is prohibitive, but not impossible to surmount, as can be ascertained by the release of the Coppola concerto by the Detroit-based Emerald Sinfonietta.

Although self-produced, this CD lacks nothing in quality: it is in fact superb. The concept of an album saluting American composers is excellent, and the orchestra tantalizes our ears with beautiful (and never-before-recorded) performances of works by Barber, Corigliano, Gould and a lesser-known but fine composer named Ingolf Dahl.

But the climax of the CD comes with the crashing cymbals and blasting brass of the introduction to the Coppola Accordion Concerto. Before hearing this recording I was ignorantly unaware that Carmine Coppola (1910-1991) had even written for accordion. I knew he was a respected film composer who scored the music for Godfather II, Godfather III, The Black Stallion and Apocalypse Now, but this was news to me.

And the concerto is delightful; a substantial three-movement twenty-three-minute work with luscious melodies, attractive harmonies and exciting orchestrations. I believe it has been too long neglected.

Certainly I must not neglect the performer of this work, American accordionist and bandoneonist Peter Soave, who by his consummate artistry and personality helped make this first recording by the Emerald Sinfonietta an artistic triumph. Oh yes! I Almost forgot to mention the bonus track (not by an American composer), Astor Piazzolla's romantic Decarissima, with truly fine bandoneon playing by Peter. I am unabashedly impressed by his ambidextrous abilities.

Despite the incompetency of the person who supposedly proofread the CD booklet notes (the word accordion is misspelled as accordian on the CD cover!), I predict this CD will become a coveted treasure in the audio libraries of all classical accordion lovers.