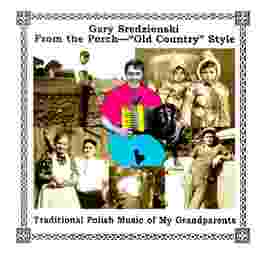 Gary Sredzienski's grandfather, Franciszek, passed away before Gary was born, but evidently it was his grandfather's dream to have an accordion player in the family. I think Franciszek would be most pleased with his grandson, for today there is not only a fine accordion player in the family, but one who honors their family's Polish cultural traditions.

The program of this compact disk certainly does have all the feel of a good old family musical evening on the back porch. Interspersed with performances of folk music are spoken excerpts, great singing, and even some harmonica playing on "My Two Sons," a composition by Ed Sredzienski, Gary's father. When Ed joins in on this performance, I could feel the warmth and pride that he must have for his sons. This father/son relationship was further explored in "Marta."

There are some great performances that will thrill the listener whether of Polish descent or not. I particularly enjoyed the "Goralski Medley" and the romantic "Dzis Do Ciebie Przyjsc Nie Moge," which was popular during World War II and the German occupation of Poland. Gary has a way with the happy conviviality inherent in Polish folk music; this is especially apparent in his playing of "Wesofa Mania," his grandfather's favorite.

Other standouts on the CD include "Pozegnanie Ojczyzny" which is the oldest Polish national dance and "Polish Bagpipe Medley" (yes, they have bagpipes in Poland, they are known as a dudy). And who can forget that most famous of Polish composers, Chopin. Gary pays tribute to him in an accordion arrangement of the Valse in G flat Major, Op. 70 No. 1. Since Chopin found much of his inspiration in the folk melodies of Poland it is appropriate that this selection appear on a CD devoted to folk music.

Along with the CD, we received a note from Gary telling a little about himself and imploring that we be merciful: "I'm 36 and for the last 10 years this is how I have fed myself and my dog!" Well Gary, I think your dog doesn't have anything to worry about; I think he will continue to be well fed judging by the neat music on this CD.

This is one album I can certainly recommend for our Polish friends, folk music aficionados or simply lovers of traditional accordion. Oh, I should mention that the sonic quality of the CD is very good. The other musicians on the recording are very pleasant and provide a nice balance of sound.

After listening and reviewing Gary's superlative From the Porch compact disk, produced in 1995, I was expecting more great things. And while this CD was not to let me down, it was quite different from what I expected. Gary has expanded his repertoire beyond the Polish themes he explored in his last recording and ventures into many different musical cultures and styles. While it is successful for the most part, I found it a little too unfocused in content. Musical styles bounce across a wide spectrum: from folk to big band to classics to jazz. This is not to say this is not great music..., it is! Gary has a real genius for making a nifty recording and his playing is excellent.

As on his other CD, Gary takes a unique approach to his material. He has included interviews with people, one of which is a discussion with a fellow who plays spoons on the tunes "Rubberdolly" and "Reel St. Louis" (the latter is a real keeper). The square dancing discussion with the composer of "Frosty's Reel" and "Bo's Breakdown" is also great. This makes for an intimate CD; you feel you have known Gary and his friends for years.

Again, the recorded sound is excellent as are all the musicians, especially that clarinet player on "Christmas Swing"! Unfortunately Gary didn't list the various musicians performing with him on the CD. To be commended, however, are the liner notes that fully discuss each tune played.

The tunes I enjoyed most? The already mentioned "Christmas Swing" and "Rubberdolly." Another was the "Roumanian Hora Medley" in which he utilized the air switch on his accordion to simulate the wind. Certainly there isn't a tune on this CD that can be considered "standard accordion fare." And that is what makes this recording so unique. It's a collection of fresh tunes that you aren't likely to hear elsewhere any time soon. Perhaps the only items that didn't really fit well into this collection were the classic pieces. Otherwise, this CD is a must buy for any afficiando of the accordion.

dear robert....just a short note to thank you so much for kind reviews of my albums...if i gig again in the san francisco area i would love to look you up!!! my first album landed me a 2 week performance at the Smithsonian this summer. Robert...in your review of my second album you said that it was unfortunate that i didn't mention any of the other musicians......perhaps you didn't read the liner notes because each and everyone of them are mentioned after the description of each song!! I am also glad that i included the classical tunes because 2 music magazines said that was their favorite tunes!!! can't please everyone......but robert, thank you so much and please keep in touch.