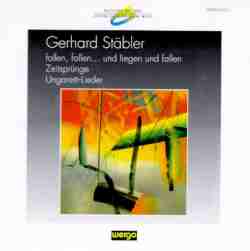 Zeitsprunge for accordion and percussion

Ungaretti-Lieder for voice and percussion

The German composer, Gerhard Stabler (b. 1949), began his affiliation with new music in the 1960's and became active with radical street theater, creating the music for several plays. His music often expresses political and social concerns. Stabler currently teaches music theory at the Folkwang-Hochschule in Essen and was the artistic director of World Music Days 1995 in Ruhrgebiet. He has presented lectures and concerts throughout Europe, Asia and North America and has taught at numerous American universities, including Stanford, Yale, Columbia and Wesleyan. He recently completed a two-month concert/lecture tour of the United States and Canada.

Stabler (who is also an accordionist) wrote, "Why the accordion plays a prominent role in my oeuvres is most evident in my work fallen, fallen . . . und liegen und fallen for soprano, tuba, accordion and tape (1988/89), as the instrument is chosen because of its unique characteristics. The music is based on poems by Paul Celan and requires -- relating to the multi-layered content and the compositional concept -- a continuum of sound from technically produced electronic sounds on tape to the voice of a human being.

"While the tuba is triggered by the breathing of a player, the accordion as a 'machine' has tight links to both the tape and the voice. It can produce nearly-perfect sine waves -- the fundamental basis of sound -- in the high register and it can also create agglomerates of sound that are close to common electronic sound structures. The accordion can also imitate the voice, using double stops (the register with two eight foot reeds -- the violin register), i.e., it can 'sing' and the instrument can even breathe, pant or groan, if unvoiced sounds of the bellows are used."

The first piece on the CD, fallen, fallen . . . und liegen und fallen is dramatic (as are all of Stabler's works). The composition is based on the gradual and concentrated movement of parataxis -- the montages of various sound blocks and elements in succession or juxtaposition -- and not on hypotaxis -- the principle of subordination and classical organic evolution. In a word, his music is more akin to Stockhausen than Schoenberg. Some of the taped sections are strange and alien sounds, other sections contain faded-in march music with the German national anthem, hysterical reactions of Third Reich crowds and cries of "Sieg Heil" (all taken from Nazi newsreels) as well as noises from the world of machines and computers (including advertising jingles).

The second piece, Zeitsprunge for accordion and percussion is a paradoxical, hour-by-hour reflection of a single day. Stabler's music is based to a large extent on mathematics, like the serial music of Milton Babbitt. He uses various arithmetic series, letters of the alphabet, the golden mean and Morse code to structure his music.

The third and final piece on the album, Ungaretti Lieder for voice and percussion, is based on the lyric poems of Giuseppe Ungaretti (1888-1970). As in fallen, Stabler declines to set these poems in the manner of German art song. Instead he sublates them in his composition by incorporating them into the material and structure of the music. The percussion instruments include lithophone, xylophone and dulcimer, as well as unpitched instruments such as tamtam, triangle, claves and various kinds of drums.

This album is for dedicated aficionados of new music. Don't expect to hear any bel canto melodies or danceable rhythms, but do expect a powerful expressionistic presentation of modern art music. The printed commentaries (in German and English) are well-written and extremely technical. Unfortunately, the texts by Celan and Ungaretti were not included in the CD booklet.