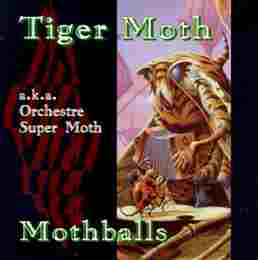 "Saturday night in Buckinghamshire. . . . In the main hall the monthly ceilidh looks more like a riot. When the home counties let their hair down, anything goes. Round the wooden floor a few couples and older folk are sitting this one out, while lines and squares of dancers are forming into simple manoeuvres marshalled by a caller from the stage and then crashing through the steps with yomping delight.

"Onstage, Tiger Moth, the vanguard of the New Wave of English Country Dance Bands. . . are changing gears, driven forward by the seated figure of Rod Stradling, a melodeon clutched to his chest, fingers working overtime and a maniacal stare on his face. He has all the intensity of a Vietnam veteran in a wheelchair." -- Mark Cooper, from the CD booklet notes.

The first thing I noticed about the CD "Mothballs" was the cover: a surreal painting by artist Rodney Matthews of a gigantic moth (remember the ca. 1950 monster movie titled "Mothra?") playing a melodeon (a two-row diatonic accordion) while a beetle and cricket dance together.

The second thing I noticed about the CD was the music: zany, lively, danceable and fun. The band obviously loves to play. Colin Irwin wrote about the recording sessions in the booklet notes:

"The line between divine inspiration and rank stupidity is notoriously fine. How else are daft japes magically transformed into acts of breathtaking ingenuity with barely a sleight of the hand? . . . They didn't rehearse, they barely discussed what they were going to play, let alone how they were going to play it. . . They just got stuck in and let nature take its course. Impromptu wasn't the word for it. The only groundrule they applied to recording was that none of the tracks should go much beyond three minutes. . . Their own disparate musical backgrounds, influences and peculiar musical preferences were encouraged to be given full rein. The whole thing had little apparent order, convention, theory, or routine. Which is, of course, why it sounded so damn good."

I agree. It does sound damn good. Nice combination of folk tunes on melodeon, electric guitar power chords, hammered dulcimer, sythesizer and drums, with elements of reggae, blues, rock 'n roll, jazz, world music and all manner of strange things besides. Unfortunately, the weakest part of the album (in my opinion) was Maggie Holland's singing in "Salt of the Earth," -- the only track which was not strictly instrumental. Her voice simply sounded untrained and amateurish in comparison to the great abilities of the instrumental musicians in the band. I would have preferred to have heard another singer on this track.

This album is for lovers of folk/rock.