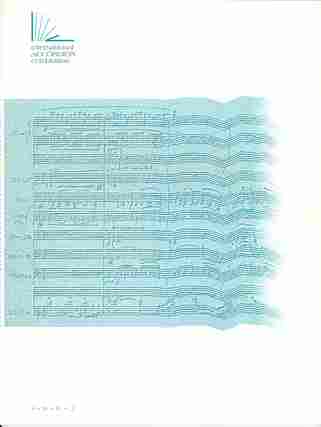 plus dozens of other performers on accordions, strings, woodwinds, brass & percussion instruments

On Friday night (April 2, 1993) I found myself walking through the glittering lights of the broad avenues between the towering skyscrapers of downtown Toronto. My destination: the showcase of the fine arts in Canada -- Roy Thomson Hall. After entering the ultramodern structure I joined a sea of thousands of other formally attired ticket-holders for tonight's concert by the world class Toronto Symphony Orchestra in works by Richard Wagner, Ludwig van Beethoven, and a brand-new concerto written by the renowned Canadian contemporary music composer, R. Murray Schafer.

I settled into my seat near the front of the huge concert hall as the 100 plus members of the orchestra finished tuning their instruments. After a few seconds, the house lights dimmed, the audience hushed, and a spotlight appeared on stage left, illuminating two tuxedo-clad gentlemen crossing to center stage. The audience spontaneously erupted into a thunderous welcoming applause.

This performance with the Toronto Symphony Orchestra was the climax among dozens of concerts and workshops during the first International Accordion Celebration. Never before had I seen so many virtuosi of the instrument appear together for such an extended festival of serious music for the instrument.

Delegates from twenty-five countries traveled to Toronto to hear concerts by the greatest living classical accordion artists: Hugo Noth from Germany, Friedrich Lips from Russia, Mogens Ellegaard from Denmark, Matti Rantanen from Finland and Miny Dekkers from the Netherlands. Every night for ten days there were recitals and workshops and lectures, all featuring the accordion.

In addition, the post-concert receptions at the elegant Park Plaza Hotel were wonderful opportunities to meet the artists and participate in spirited conversation until the early hours of the morning. While attending these parties, I understood what it must have been like for nineteenth century lovers of fine piano music to have rubbed elbows with Franz Liszt, Frederick Chopin, and Ludwig van Beethoven at the palaces of the dukes and princes of Europe. I noticed several American accordion pioneers in atte ndance: Charles Nunzio, Julio Giulietti, Mort Herold and Peter Soave.

A competition was also held which attracted the finest accordion students from Russia, Norway, Serbia, Switzerland, Finland, Germany, Poland, Slovakia, in addition to the United States and Canada. The Festival was an event of such great magnitude that the Prime Minsister of Canada, the Premier of Ontario and the Mayor of Toronto all conveyed their best wishes for its success. The International Accordion Festival was truly a heaven for lovers of classical accordion music.

The entire event was accomplished through the efforts of Joseph Macerollo, who underwent great austerities to organize and carefully guide each detail of the celebration through its inception to its execution. Similar accordion events will be held in Holland in 1995 and Finland in 1997. For more information contact Joseph Macerollo, 3296 Cindy Crescent, Mississauga, Ontario L4Y 3J6 Canada.