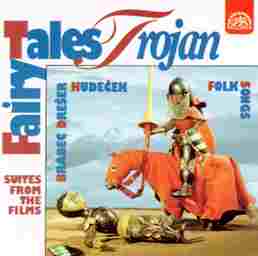 Fairy Tales is the kind of compact disk that, were I rummaging through bins at the local record shop, I would probably have passed over with the briefest of glances. Were I to give it a second thought, it would have been to try to figure out why the album title has the composer's surname appended to it. A bit more thorough look at the cover would have probably convinced me that there could be nothing appealing on it, as animated children's films are generally outside my realm of interest.

Had my prejudicial "book-by-the-cover" judgment prevailed, the loss would have been mine! It was truly fortunate that I did not encounter this recording in the above context but instead received it with a group of other compact disks to review. Even so, it was not the first disk that I chose from the stack. When I did finally play it, I received the most pleasant of surprises.

First, let me assure potential listeners that this gem is not a children's recording by any stretch of the imagination; nor is the music puerile, even though most of it was written to be the soundtrack of two animated films. Second, what is surprising about this music is its depth, clarity and wit. The composer, Václav Trojan [Vá-tslav Tró-yan], endowed these compositions with a multi-dimensional quality unusual in music destined for a young audience. (In this, he understood that children rarely like to be treated as such!) Even more important is his straightforward, almost ingenuous approach to composing. This directness gives his work an immediacy and transparency. The music evinces a wide-eyed and winsome charm that says much about Trojan's ability to speak volumes with an economy of means.

An economy of instrumentation is another reason for this recording's charisma. As in all chamber works, the interpretative duties are divided among a small number of instruments: a violin, an accordion and a guitar. Is this a diverse trio of voices? To be sure, and because of this they are quite complementary! The composer builds solidly upon their strengths; the guitar provides rhythm, the accordion, an organ-like chordal foundation, and the violin often carries the melody. This scheme is not a hard and fast rule, however. Being illustrative music, color and shading are extremely important, even critical, therefore the balance and instrumental roles change constantly.

Trojan also artfully draws upon peripheral characteristics of the instruments to create some interesting special effects. Accompanied by ponderous, chromatic figures on the accordion's low bass notes, the guitarist rubs the strings of his instrument, producing a breathy, metallic sound and thereby creating a vivid image of the slithering dragon that Prince Bajaja must battle. Later, in music from The Emperor's Nightingale, the violin's sweet, high notes give a poignant voice to the nightingale's warbling. The song of the clockwork bird is played in barrel organ fashion on the highest accordion reeds. When the emperor's mechanical nightingale grinds to a halt, its failure is perfectly indicated by sudden discords and the toneless clicking of the accordion's register switches!

Considering that most of these pieces were composed for the Czech cinema, one might well ask if this music has an ethnic cast. Undoubtedly! It must be so, especially in the instrumental arrangements of folk songs that follow the film compositions. However, listeners need not be of any particular ethnic group to enjoy this music. These pieces are perhaps even more accessible than the compositions of Antonin Dvorak or Leos Janacek, and listeners will find that the same sweet melodic formulas that inspired those composers also permeate Trojan's compositions.

Vaclav Hudecek, Pavel Dreser and Lubomir Brabec give an exemplary reading of the score throughout; their smooth and polished performance contributing greatly to the overall warmth and clarity of this CD, not to mention facilitating the composer's vision. That the musicians truly enjoyed performing these compositions goes without saying. This is wittily reinforced by the photograph of the trio in the CD booklet, showing accordionist Pavel Dreser mischievously twisting the tuning pegs of his compatriot's instruments while they are playing.

To what audience would I recommend this recording? Well, it is most certainly contraindicated for people of any age group who cannot deal with sincerity, warmth, humor and innocence! Listeners will find little or no bombast here. Grandeur, too, is in rather short supply. Instead, they will find simple elegance in this music, and a kind of naďve nobility. This is the nobility of a humble heart rather than of lofty principle. After exposure to this recording, I am convinced that Vaclav Trojan himself must have been a gentleman with a large heart, for his music speaks so clearly and directly to that part of the human anatomy! Without hesitation I predict that this album will appeal most to listeners with large and somewhat tender hearts themselves.