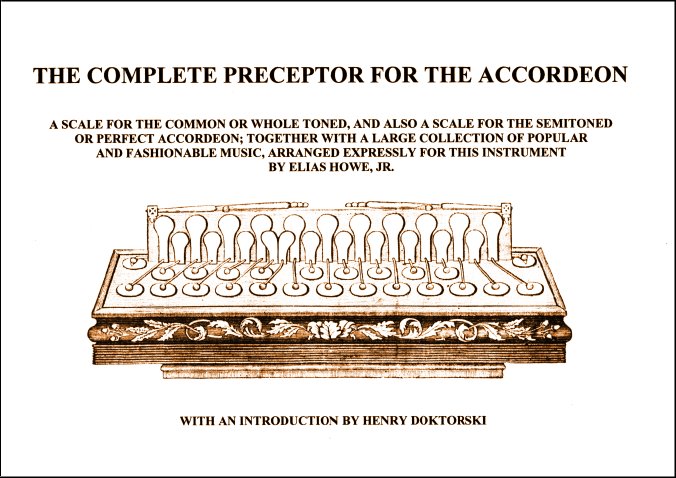 The Complete Preceptor For The Accordeon

THE COMPLETE PRECEPTOR FOR THE ACCORDEON: A SCALE FOR THE COMMON OR WHOLE TONED, AND ALSO A SCALE FOR THE SEMITONED OR PERFECT ACCORDEON; TOGETHER WITH A LARGE COLLECTION OF POPULAR AND FASHIONABLE MUSIC, ARRANGED EXPRESSLY FOR THIS INSTRUMENT.

With a New Introduction by Henry Doktorski.

*A diagram of the scale for the diatonic single-action accordion with a 20 note range with an explanation of the letter and numerical symbols accompanying the staff notation.

*86 songs written in traditional staff notation for single-line melody in treble clef, as well as a series of numbers and letters which allow those who do not read music to play the pieces.

* The scale for the semi-toned or perfect accordion [also single-action]. This was a nearly-perfectly chromatic instrument with a 37 note range. Also included is an illustration of the semi-toned instrument.

* A contents page which appears at the very end of the book.

Doktorski explained in the Introduction:

The Complete Preceptor for the Accordeon is a fascinating relic of an earlier era: Howe's book was published in 1843, only fourteen years after the Austrian piano and organ maker Cyrill Demian (1772-1847) patented the accordion in Vienna on May 23rd, 1829.

The illustration of the semi-toned accordion in Howe's book is detailed and clearly shows the placement of the keys, pallets, valves, bellows and ornamental filigree.

The choice of tunes presented gives us an indication of the styles of music which the public expected to hear on the accordion. There were the expected European ethnic songs: British, Irish, Russian, German, Hungarian, Danish, Prussian, Swiss, etc., as well as some folk fiddle tunes such as Old Zip Coon.

Certainly The Complete Preceptor for the Accordeon is a priceless treasure from the annals of free-reed history. 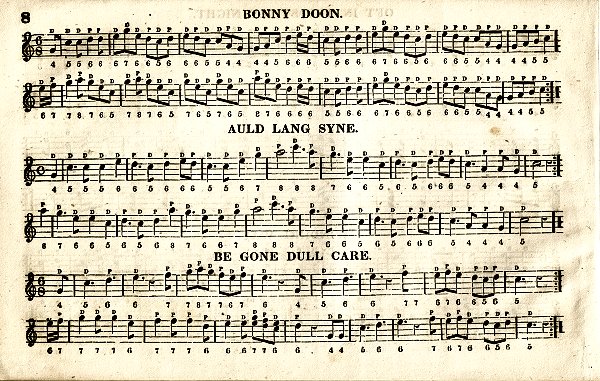 One page from The Complete Preceptor for the Accordeon.