Under the Sign of the Scorpio
Sofia Gubaildulina, composer 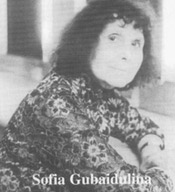 "Under the Sign of Scorpio"
Variations on Six Hexachords for Bayan And Large Orchestra
by Sofia Gubaidulina (b. 1931)

For many years now Sofia Gubaidulina has promised a concerto for accordion and orchestra which has been put back in her delivery of work by other commitments. In early August this year the manuscript was at last delivered to Friedrich Lips the new work's dedicatee who spent the months of August and September learning it and discussing it with the composer as he says note by note and 'button by button'. Lips has now given two premiere performances: one in Stockholm on 10th October 2003 and one in Rotterdam on 6th November 2003. On both occasions the work was well received and in Rotterdam it received a standing ovation from a very full audience in the de Doelen Concert Hall.

It is a long work lasting around 40 minutes and written for a 'large' orchestra. In Rotterdam it was programmed with Prokovief's Violin Concerto No 1 in D Major (1916-17) and Shostakovitch's Symphony No5 in D minor (1937) with the Rotterdam Philharmonic Orchestra. In Stockholm it was programmed with Bruckner's Ninth Symphony. Both the Shostakovitch and the Bruckner symphonies employ large orchestral forces in the woodwind bass and percussion departments which were all required in the new Gubaidulina work which from the start marks it out as unusual for an accordion concerto. Most accordion concertos to date have employed comparatively small orchestras if for no other reason than the problem of balance. Miss Gubaidulina skillfully avoids difficulties of balance with the heaviest ff tutti passages in the work marked by rests for the soloist and in the most pianissimo passages a microphone is used especially to amplify the use of the air button.

Pointing to an accordion on one occasion in Lips' presence Miss Gubaidulina remarked 'Do you know why I love this monster, so much? - It breathes'. Characteristically this aspect of the instrument has been used in all Gubaidulina's works employing the accordion, solo, chamber and now with full orchestra.

The search for the unique musical resources of the accordion has undoubtedly been a marked feature of all Gubaidulina's accordion works, which have been spread over a period of nearly 25 years. Her first work Di Profundis begun in 1978 and premiered in Moscow in 1980 shocked for many years but it was a totally new and unique use of the accordion not surprisingly therefore Gubaidulina in writing a concerto for accordion and calling it 'Variations on Six Hexachords' looks to basing it on a unique feature of the accordion. In her own Preface to the work she explains: -

There are instruments that allow a transition to be made from one sonic spatial dimension into another without changing finger positions on the string or keyboard. All such instruments hold a particular fascination for me.
A natural harmonic of a third, for example, is produced on a stringed instrument when the ,finger only lightly touches the string. If one replaces this light touch with an expressive vibrato, however, one immediately finds oneself in a completely different sound world although the finger remains on one spot, unchanged. Only the relationship to this point changes the degree of contact. With the bayan, too, there is the possibility of changing, from one sonic spatial dimension into another. This is done by switching from the single-tone manual where each button corresponds to a particular tone, to the standard-bass manual where each button corresponds to a chord. I made use of this special characteristic of the instrument in the bayan concerto: three melodic notes on the single-tone manual are here transformed into,five or seven-voiced chord complexes by switching manuals.
But another possibility of the standard bass manual was the most important one for me: by simultaneously depressing two buttons corresponding to a major and u minor chord respectively and then shifting the hand gradually upwards or downwards over the instrument's entire range without changing the finger position six different hexachords will result. These six hexachords lend the entire composition the structural, foundation for its material and form: variations on six hexachords thus the work's subtitle.

No one should think that 'Hexachords' are all there is to this work. Listening beyond the notes the orchestral effects by which the solo part is reflected in the different sections of the orchestra are quite brilliant and are probably' the result of many years of thought by Gubaidulina about the 'monster' as she calls it with which she fell in love many years ago. It may take soloists conductors and audiences some years to absorb and fully appreciate many of the subtleties that appear to be in this work. Those interested in the classical accordion and its development are fortunate now to have a late work by a front rank contemporary composer which is going to provide a challenge for the future.

The title of the concerto 'Under the Sign of Scorpio' apparently arises from the fact that the work is dedicated to Friedrich Lips who was born under the Zodiacal sign of Scorpio which is also Gubaidulina's own Zodiacal sign.

There have been many attempts to write concerto works for accordion and orchestra that would make the accordion popular with the promoters of symphony concerts. Given the number of attempts and the infrequency with which the works are heard one has to conclude that success so far is comparatively limited. One might say that these attempts started as long ago as 1947 when in March of that year Toralf Tollefsen presented Pietro Deiro's Concerto in E at the Royal Albert Hall in a concert which included Beethoven's Symphony No7 and ballet music from Swan Lake by Tchaikovsky. Or one might put the starting date in 1958 when Mogens Elegaard presented Ole Schmidt's 'Symphonic Fantasy and Allegro for Accordion and Chamber Orchestra' (Op 20)--the first concerto for free bass accordion. Since then the number of concertos has been considerable including those by Arne Nordheim 'Spur' (1980). T Lundquist 'Concerto da Camara' (1966), two concertos by Nicholai Tschaikin (1966 and 1973), two by Vladislav Solotaryov (to be released on CD in 2004 played by F. Lips), a prize winning concerto by Erkki Jokinen (1987) of Finland and concertos in the UK by Gordon Jacob (1974), John Macleod (1993) and John Webb (1997) and others. These are but a few, but it could hardly be said unfortunately that any have taken off in popularity even though some of them have been commercially recorded. Perhaps the most popular so far have been the larger works of Astor Piazzolla particularly his Double Concerto for Bandoneon and Guitar a work frequently heard in popular orchestral music concerts with an accordionist playing the Bandoneon part and available on many CD's.

Will the new Gubaidulina concerto fare better? Accordionists will certainly hope so. Her other works including the accordion, solo and chamber works have all been recorded many times. Publication of the new concerto will be in mid2004 by H Sikorski (Hamburg). In the meantime performances can only be given by the work's dedicatee Friedrich Lips.

Sofia Gubaidulina (b.1931)
Works with Bayan

In addition to the above Gubaidulina's Symphony 'Figures of Time' (1995) commissioned for Sir Simon Rattle and the City of Birmingham Symphony Orchestra contains a substantial accordion part in the orchestra.