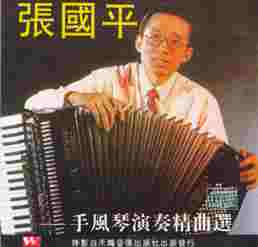 OK, I admit it. I wasn't sure what to expect. Maybe machine-like bland performances. Maybe a tinny sounding, inexpensive accordion. Strike one for American mid-western provincialism.

Well, what a pleasant surprise this CD was - to hear a virtuoso accordionist from China giving the best European musicians a run for their money! Zhang Guoping has chosen a wonderful variety of music. It is a cliche to say that music is the universal language. But it was a delight to hear Zhang make Frosini's Olive Blossoms sound as if it's his own. (Which makes me think... those boys in Castelfidardo had better take heed of this rising star and his box. After all, not so long ago, GM scoffed at Honda and Toyota.)

I particularly enjoyed the pieces by (I assume) Chinese composers (tracks 3, 4 and 5.) Water Sprinkling Festival is a treasure. The introduction is a slow passage that showcases the delicate beating of the reeds in quiet harmony. The second movement is more lively with some gorgeous trills. The piece concludes with a flourish of elegant runs and bellow-shakes. A comparison with Copland's Rodeo in terms of its thematic content is not too unreasonable.

I think many accordion aficionados would enjoy a recording of just these wonderful Chinese composers. There is certainly enough richness of sound and technical challenges for a musician to showcase himself. With my Western sensibility I wasn't expecting such harmony, rich texture and interesting melodic lines. There is some very modern sounding music here but always with a firm base in the Chinese style.

Somewhat surprisingly, it only took 7 days for this CD to arrive from Beijing. (Strike two for mid-western provincialism.) The liner notes are in Chinese although Zhang has provided an English translation of the track titles. Unfortunately he did not include the CD title. Zhang plays a converter accordion. He does some very graceful quiet bellow-shaking with it.

There are some real sparking gems on this CD - for instance, Rassypucha is a chromatic blizzard. Perhaps the most exciting aspect of this CD for me was Zhang's musical selections. His selections displayed a wonderful variety of music. They seemed to me timeless - some were rooted in traditional forms and styles but nonetheless displayed very contemporary harmonies.

There is a slight difference in some of the recording presence on some of the tracks. I believe this is due to these tracks being recorded in a live setting and at different times rather than a studio. By this I mean that all the ambient sounds are natural. Zhang was born in 1960 and these pieces were recorded between 1980 and 1994. To my ears there was an awkward tape splicing on Playful Dance when there's a slight but noticeable tempo break. I think what he may have done is spliced out the sound of a register being switched. There are some missed notes which don't bother me when taken in the over-all context of Zhang's musical idea. (Except that the final major triadic descent on Sabre Dance, being such a critical phrase and one that closes the CD should have been cleaner.) Trepak starts with a slow, quiet bellow-shake that gradually accelerates and gains volume. Again, marvelously played. Little White Donkey is one of my favorite pieces - it transcribes very well for the accordion. This piece is probably most representative of the entire CD. I've never heard it performed more beautifully. And my standard of reference is Christian DiMaccio's version of it.

Zhang plays with much confidence, style and expressiveness. His tempo and volume transitions are very natural. I particularly enjoyed his bellow shaking on Figaro's Air. I would never have thought bellow shaking could be so melodic.

In a note that Zhang sent along with his CD, he indicates that his next CD will be published very soon and will consist of Scarlatti Sonatas. Based on the evidence of what I heard on this CD, I expect that he will be able to infuse Scarlatti with the same lively playfulness. Zhang also notes his interest in Stefan Hussong. Again, I encourage Zhang to study the western composers, but not to forget his musical roots. Is it too far-fetched to suggest that Zhang could "Piazzola-ize" Chinese music?

Just for the record: Although Guoping's CD spent only one week in transit before it arrived at Tom's house, the same CD arrived at my house after fourteen weeks! I think my CD traveled across the Pacific by rowboat! :)

There are times I think his playing is almost amusing, and yet I am in awe of his technical abilities. You probably know what I mean. Here is a person who was not born to our music and has never been exposed to it within the boundaries of our culture; he is a musician who learned it by "export" and from his teachers. I think this background is the reason for his blissful exuberance and the egalitarian way he embraces all these pieces, whether they are sublime or absolute musical kitsch. He simply devours them all! He has an absolutely fresh point of view, and I've never heard anything quite like it. He embellishes, often not perfectly or in the way a westerner would, but yet in a way that works within his personal style. He is quite an original player to my ears.

Just had to say that to someone who would understand. Most of my friends still scratch their heads when they find me listening to an accordion CD; they are doubly confounded by a Chinese accordionist playing Western "light" classics.