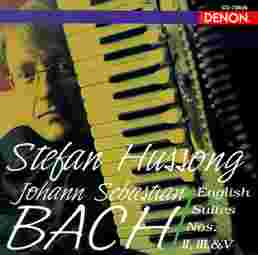 Stefan Hussong is attempting to do for Bach on the accordion what Wanda Landowska has done for him on the harpsichord. Hussong has established an enviable niche for himself in these lovely free-bass accordion transcriptions of the baroque master. Flawless articulation, silent bellows phrasing and complete hand independence make Hussong an exquisite ambassador for the classical accordion. But this is not just a technical extravaganza. Stefan is able to make you hear his love of the instrument and the music. The liner notes have two wonderful photos of him which, to me, convey both sides of his artistry. The cover photo shows the sharp mind of this young musician. The back photo is a sensitive and warm portrait of Stefan caressing the sounds from his instrument.

Hussong's accordion is a Giovanni Gola, Nr. 911 manufactured in 1968 by Hohner. Its tuning was done by Joaquim Gomes da Silva. All production and engineering aspects were performed by Japanese technicians using 20 bit digital editing and mastering equipment. The recording was done on 26-28 December 1994 at Aobadai Philia Hall, Yokohama.

Mr. Hussong writes a brief history of the accordion in the twentieth century to begin the liner notes. The secret of the success of this transcription is his comparison of his accordion "in principle to a two-manual keyboard instrument, such as the two-manual harpsichord, while resembling a wind instrument in the way of producing and controlling the sounds." Added to this is the "bellows action similar to the bowing of a stringed instrument." As Stefan says, "it all makes it an extremely fascinating and new instrument of the twentieth century."

All notes are written in English, German and French. Stefan's notes are followed by those of Jens Hagestedt as translated by Robin Thompson. Hagestedt's notes are obtuse philosophical arguments for performing Bach on the accordion. These arguments are to me unnecessary unless there still exist classical music purists that need logical convincing. But put the CD on - the sounds will convince you that this is music of the highest integrity and faithfulness to Bach's intentions. If the free-bass accordion had been around in Bach's time, I believe there would be no doubt that he would have approved hearing his music played on it.

Stefan was born on November 2nd, 1962 in Kollerbach, Germany. He has studied with Eugen Tschanun, Hugo Noth, Joseph Macerollo and Mayani Miyata at the University of Trossingen, Toronto and Tokyo. Though clearly at home with the Baroque period, his biographical notes indicate that he has also recorded "highly contemporary music." The notes continue, "since 1990 he is professor for Accordion and chamber music at the Wurzburg Conservatory and since 1993 professor at the Int. Summer Academy of the Mozarteum Salzburg.

These are exciting and promising times for the classical accordion. The technical advancement of the free bass accordion combined with young virtuosi performers such as Stefan Hussong ensure a wealth of enjoyment into the next millenium for accordion lovers everywhere.