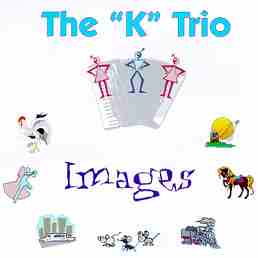 "Oh, no!" I thought as I glanced at the cover of the CD and then the song list on the back. "Images, yeah!" I looked at the pictures on the cover: a rooster, a Caspar-like ghost rising from a gravestone, a locomotive, a fashionably-dressed horse, three mice, and others.

I surmised: "These pictures must correspond to the song titles: The Rooster by Biviano, Danse Macabre by Saint-Saens, Casey Jones by Seibert & Newton, Calliope and Nine Blind Mice by Palmer-Hughes, etc."

I was prepared for the worst. Was this a CD for children? Somehow I didn't think so.

Or was it simply the best of the ca. 1950s accordion kitsch? * You know, the kinda stuff that hundreds of kids practiced before the big annual accordion competitions sponsored by the American Accordionists' Association -- (many of the composers on this album were/are important AAA members) and other accordion organizations. Stuff that fueled America's passion for accordion jokes. Stuff that some believe contributed to the decline of the popularity of the accordion; this type of repertoire -- frivolous novelties and silly program pieces and such -- was part of the reason the instrument became uncool for us kids who grew when rock 'n roll and the Beatles hit the scene.

I braced myself and put the disc in the CD player; I pushed "play" and waited.

The sounds I heard confirmed my fears: Calliope by Bill Palmer and Bill Hughes, indeed sounded somewhat like an out-of-tune calliope; it conjured up images of merry-go-rounds and smiling children enjoying an evening at the carnival. I have pleasant childhood memories myself of my parents taking me and my brother and sisters to the boardwalk at Seaside Park on the New Jersey Shore.

The next piece, The Rooster, by Joe Biviano, sounded to me like clucking chickens scratching the ground for worms. Fantasy In F by John Serry, although not programmatic like the first two pieces, was a novelty piece, reminding me of the finger flashing of Zez Confrey's Dizzy Fingers. Naturally, Casey Jones had its share of obligatory train whistles and chugging sounds.

But the piece which took the cake was Palmer-Hughes Nine Blind Mice. It seemed to be a set of nine variations on the nursery rhyme Three Blind Mice. Variation two was in a polka style, variation three was in the minor mode reminiscent of the Wild West Indian stereotype music like Indian Song from the Palmer-Hughes Method Book One.

Then there was a quote from the Prelude in C#m by Rachmaninoff, then the theme appeared in a Strauss Waltz style. The next variation was a wild polka, and the piece finally(!) ended in a cliche Baroque 4-3-2-3 suspension which could have been lifted from the conclusion of a Bach organ work. Luckily the piece was short - only 2 1/2 minutes!

Yet, despite my pre-conceived attitude, I actually enjoyed the CD! In it's own way it is a great sampler of the mid-20th-century American accordion repertoire. Some of may be kitsch -- don't expect much profound music here -- but it's great kitsch! God! -- the ending of Casey Jones nearly blew out my speakers with that heavy amplified big bass accordion blowing steam!

(Actually there were some transcriptions on the CD of more serious works by great composers such as Saint-Saens, Beethoven, Chopin, Khachaturian, etc. but I felt they were overshadowed by the light entertainment music.)

And the performances are faultless -- absolutely faithful to the composer's intentions. I salute them. The performers -- Mary Kasprzyk Tokarski, Julie Kasprzyk Cardona and Walter Kasprzyk -- are well-versed in this music as they grew up during that era of the accordion and won several AAA competitions.

Julie represented the United States in the Coupe Mondiale competitions held in Holland in 1967, England in 1968 and New York in 1969. Mary represented the United States in Belgium in 1971 and France in 1973, while Walter captured the Connecticut State Championship in 1966, 1967 and 1968 and contended in the U.S. Championship many times. As a duet team, Mary and Julie held the AAA Duet Championship for over twelve years without being defeated. Altogether, the three members of the group have accumulated over 450 trophies and awards (!!!) during their competitive years.

Then they stopped playing for 25 years. (The reason why is not mentioned in the booklet notes.)

But they could not forget their roots (as I also could not forget mine) and so they began performing again in 1996 and I, for one, am grateful, as I think this period of accordion repertoire (mid-20th-century United States) deserves more recognition than it gets. In my opinion The K Trio is doing a wonderful job of preserving this music. I recommend this CD for accordion historians and all others who can have a good time and can have fun and laugh at ourselves! This CD will bring back pleasant memories for many of us who grew up during that era.