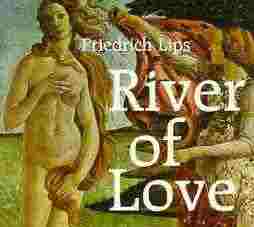 A solitary "a" is the opening premise for this work, shared by the two timbres with full vibrato on the violoncello. This singular pitch sets the tonal anchor for initial musical activity, much like a drone, from which other musical events begin to flow -- first as a semitone above, but then reaching out with arpeggios and horizontal sonorities. The slow pace is gradually heightened through rhythmic divisions in both instruments as the dynamic range is widened. The blend of timbres is fascinating and ethereal, often creating ambivalence in the listener as to which is creating the sound. There is an overall static quality to this work, as it moves from the pedal point and then returns. The reviewer was reminded of Indian ragas, where the drone of the tambura is a constant from which all melodic excursions are measured. There is return to stasis as activity subsides near the end. The form is organic and musically satisfying to hear.

2. The River of Love (Vladimir Rjabov) for bajan

This solo work opens with an enigmatic treble melody with single bass note accompaniment, much like a gentle court dance, but punctuated along the route with dissonant bass chords. The dissonant and loud chordal section which follows sets an ominous mood, and seems incongruous with the simplicity of the opening dance. A third section is polyphonic and rhythmically more demanding, with syncopation and surprises. This section is technically very demanding. A fourth section is reminiscent of the second section, outrageously harsh and threatening, with novel timbres and harmonies. The opening section is recapitulated hear the end as a waltz, providing closure mostly to unrelated musical experiences. If this is a river of love, it has more altercations than tender moments, but, as a symbol of contemporary marriage, is perhaps fitting. (And even Bedrich Smetana portrayed rapids in The Moldau!) The codetta is totally unrelated to anything that has come before and seemed to be merely added on for effect. This entire work seems to be composed of disparate sections, much like a trip through a cafeteria, which made the reviewer think: "What is he going to serve next?" I found the opening and closing sections worthy and would have liked to have heard development of these ideas in a middle section instead of further exploration and experimentation. It is a nice composition but does not hold up well on repeated hearings.

Pizzicato and pitch bending provide opening for Dream Garden in antiphonal style between the featured instruments. Musical events gradually unfold without any clear objective, other than to provide unique sonorities. The cello eventually reveals a plaintive melody against bajan accompaniment that seeks a goal through its ascending contour. It is unclear, however, if and when the goal is reached. It seems to go on and on without substance, lovely but unfocused. After a pause, the pizzicato violoncello is reinstated with bajan responding like the opening strains. This provides closure to the random events of the middle section. The blend of timbres is startling pleasant and appropriate, partly due to the richness of overtones in both instruments. The final coda is reminiscent of a simple Italian folk melody on reeds, accompanied by a low bass pitches plucked on the violoncello. This work seems heavy on effect and light on content, since its form evolves from an array of musical events, mostly unrelated one to another. It is pleasing, however, and quite avant garde in timbres produced by the two instruments.

4. Russian Landscape in the Back (Roman Ledenjov) for bajan

Solo bajan opens with a simple theme with sparse harmonic accompaniment, punctuated by dissonant outbursts. Dissonance in a syncopated rhythmic pattern played with thickening chords gradually overwhelms the melodic simplicity as the composition mutates from gentleness to outrage. This work is highly episodic, much like a collage of sounds with distant relationships. There is no unifying theme, whether melodic or rhythmic, and no development. Sections are technically demanding but with little musical satisfaction to be obtained, including air expelled from bellows as part of the composition. (The Japanese would love this technique!) I longed for a melody. Any allusion to a melody was fragmentary, with chordal insistence dominating the work, sometimes sounding like a steam engine (Poulenc's 231 or Villa-Lobas Little Train of the Caipira.) This is a technical masterpiece, but can not the bajan produce melodies and harmonies of fine sensitivity as well?

Opening passages feature an angular melody on violin with bajan accompaniment, dark, ominous and very busy. Perhaps this is the busyness of undersea life -- seen only in murky shadows for those who dwell above. This is a violent sea world, full of competition and survival of the fittest, not "The Little Mermaid". Timbres of the two instruments blend marvelously well, however, and create shimmering effects and joint sonorities of captivating beauty. There was little structure in the composition, which held it together with clear design; rather, it seemed episodic and fragmentary in its entirety.

In general, the five selections on this CD provide a novel look at sonorities and the blended timbres of strings and free reeds. Each composition, however, seems episodic and loosely structured. One would hope for a clear theme or melody at times that could be presented, and then varied or developed, since all three instruments are capable of great melodic beauty. When this is not a composer's choice for providing unity, rhythmic interest in a recurring motive or its transformation would be a logical structural point of unity. Instead, there was emphasis on novel harmonies, harsh dissonance, and additive ideas devoid of reprise in each selection. Music needs unity and variety to have appeal to listeners on a recurring basis. These selections provide much more variety than unity, which makes it difficult for any listener to store the musical data in his or her consciousness. Effects are fine, but they work best when there is a visual narrative to provide the continuity. Even quilts have some unity in their design.