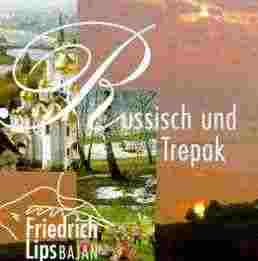 When I first put "Russisch und Trepak" on my stereo, I was immediately astounded by the incredible beauty of 1) the sound of Friedrich Lips' bayan, 2) his playing, and 3) and the music itself.

This first impression was sustained throughout the entire album for 67 minutes, which is no mean feat.

Regarding Lip's instrument: the album doesn't indicate what type of instrument he is performing on, but the sound is exquisite. If the recording is recent, the instrument is probably an Italian "Pigini Mythos," considered the "Rolls Royce" of accordions. Lips presently plays a "Mythos," which, according to an article I read some years ago in the German newspaper "Intermusik," retails for 59,000 DM (or 50 Millionen Lire)!

If the recording is more than a few years old, the instrument is probably a Russian "Jupiter" instrument, which is truly another "Rolls Royce." In either case, the reeds from both instruments are made in Russia.

In addition, I am pleased to report that the recording engineering difficulties of Lip's first CDs (unnatural and extremely heavy bass equalization in the left-hand manual) have been solved. The sound of this new CD is great!

Regarding Mr. Lips' playing: although he performs all styles of music from Bach to Piazzolla, I think he is most at-home performing the music of his home-land: Mother Russia. This seems apparent to me by the great warmth and feeling which permeates this CD. Lips is a recognized scholar of Russian bayan music and he performs like an authority. He has arranged dozens and dozens of transcriptions of Russian folk songs and concert music which was compiled in "Anthology of Compositions for Button Accordion" (published in some seven or eight hard-bound volumes) by "State Publishers

Regarding the music: here is an album of serious Russian concert music which is pleasing to the ear, the intellect and the heart. The works have been composed or arranged by internationally recognized composers as Modest Mussorgsky, Sergie Rachmaninov, Alexander Borodin, Anton Rubinstein, and Igor Stravinsky. The pieces on the album date from the mid-nineteenth century to the present day.

Truly this album could be titled: "The Romantic Russian Bayan." Although some of the composers on the album are contemporary (A. Bisow was born in 1953) all the pieces are tuneful and a pleasure to listen to; no harsh clusters or other modern music traits disturb the ear - as contrasted with the previous Lips CD I reviewed, "Also sprach Zarathustra" which could have been titled "The Twentieth-Century Russian Bayan."

In conclusion, I recommend "Russisch und Trepak" for everyone! Folk music lovers will enjoy the earthy indigenous Russian melodies and classical music lovers will enjoy the lofty artistry of the concert arrangements. My sincere congratulations to Friedrich Lips; may he continue to record albums which shine brightly like the myriad stars in the sky!